Nutritional experiences in early life can have long-lasting consequences. To encourage the adoption of healthy eating habits, this topic explains the usual development of eating habits and how to distinguish common and often temporary eating problems from chronic disorders.

Obesity is a global epidemic; its prevalence is increasing1 and it is developing earlier in childhood.2 It is therefore crucial to identify causal factors underlying early weight gain. Recent changes to the environment – such as increased opportunity to eat high calorie food and decreased opportunity to be physically active – have undoubtedly played a role. Nonetheless, not everyone is overweight. Body weight has a strong genetic basis,3,4 leading to the hypothesis that genes may influence how vulnerable an individual is to gaining weight in the modern environment.5 Genetically-determined susceptibility to the environment would help to explain how obesity can be both genetic and environmental.

Eating behaviour, or appetite, has been proposed as one mechanism through which genes influence obesity susceptibility.5,6 In particular, individuals who inherit a more avid appetite – high responsiveness to external food cues and low sensitivity to internal satiety (fullness) processes – may be more likely to take advantage of the multiple eating opportunities presented by the modern environment, and consequently gain more weight. That is, genes may influence how big or small an individual’s appetite is, and ultimately these genes therefore impact on their weight, so-called “inherited behavioural susceptibility to obesity.”

Eating behaviours of interest are those with evidence for a causal role in early life weight gain.7-11 Broadly these can be thought of as “food approach” behaviours which indicate a bigger appetite and a greater interest in food (e.g., enjoyment of food11 and responsiveness to external food cues8,11) and predispose to weight gain, and ‘food avoidance’ behaviours which suggest better appetite regulation and a lower interest in food (e.g., sensitivity to satiety9,11 and slower eating speed7,10,11) and protect against weight gain. Observational measurement of eating behaviour provides detailed information, but is time-consuming and expensive so the number of observations is limited, which is problematic for genetic research which requires large samples (see below). It is also possible that participants alter their eating behaviour in response to being observed, especially self-conscious overweight adults. Using children instead of adults helps get around this issue, and the development of a parent-report measure of child eating behaviour (the Child Eating Behavior Questionnaire [CEBQ]12,13 or the Baby Eating Behavior Questionnaire [BEBQ]14) has enabled information to be collected reliably on very large samples, for a range of eating behaviours.

Two different approaches allow researchers to explore genetic influences on eating behaviour. So-called “quantitative genetic” studies estimate broadly the extent to which behaviour is influenced by genes or environment.15 Studies compare family members who differ in their genetic relatedness – if relatives who are more genetically similar are also more similar for eating behaviour, genetic influence is inferred. Twins are commonly used because identical twins (monozygotic pairs, MZs) are 100% genetically identical, while non-identical or “fraternal” twins (dizygotic pairs, DZs) share on average only about 50% of their genes, like regular siblings. At the same time, MZs and DZs can be assumed to share environmental factors to a very similar extent (e.g., they are born at the same time into the same family), so they can be compared. Greater similarity between MZs compared to DZs suggests that genes influence eating behaviour.15 Heritability is  the statistic that is derived from twin studies, and it indicates the extent to which individual differences in the sample are explained by genetic variation. The statistic ranges from 0% (genetic variation does not contribute to individual differences) to 100% (individual differences can be explained entirely by genetic variation).[1] Twin studies are limited in that they cannot tell us anything about the actual genes involved, they simply indicate the relative importance of genes versus environment.

Molecular genetic studies try to identify the specific genes. Early research studied individuals and families with extreme manifestations of the trait – e.g., severe early onset obesity – to find genes.16 These studies identified genes responsible for rare and serious genetic disorders, but not common genes influencing variation across the general population (e.g., body weight). Recent technological advances combined with the completion of the Human Genome Project in 2000 have made it possible to explore the impact of millions of genetic variants on traits across the wider population, using a method called genome-wide association (GWAS).17 Large samples are needed for quantitative genetic studies and even larger samples for molecular genetic studies.15

The high heritability of body weight in children and adults (~70%) is a long-standing finding established from a wealth of twin and family studies.3,4 Similar heritability estimates have been found for infant and child eating behaviour. The CEBQ was used in 5,435 pairs of 10 year old British twins to demonstrate that the majority of individual differences in responsiveness to food cues and satiety responsiveness are determined by genes (75% and 63% respectively).5 A similar estimate was obtained for an observational measure of eating speed (63%) in a subsample of 254 of these twins at age 11.18  An infant-version of the CEBQ (the BEBQ19) showed comparably high heritability estimates for enjoyment of food (53%), food responsiveness (59%), satiety responsiveness (72%) and slowness in eating (84%), in 2,402 infant twin pairs.20 The same sample of infant twins was also used to show that about a third of the genes that influence eating behaviours influence weight as well, supporting the idea that genes influence weight via their effects on eating behaviour.21

Early studies of obese individuals and families identified major mutations in one of a few genes resulting in severe early-onset obesity, as well as extreme appetite voraciousness and no apparent satiety.22 These genes are fundamental regulators of the leptin-melanocortin pathway that controls hunger and satiety centrally, and is located in an ancient part of the brain called the hypothalamus. While the discovery of these genetic mutations provided important insights into the biology of body weight and eating behaviour, they are extremely rare and therefore do not explain weight variation at the population level.

Genome-wide association studies (GWAS) have identified more than 30 common genetic variants associated with body weight in adults and children.23 The first to be discovered was the “fat mass and obesity-associated gene,” FTO.24 Nearly half of us carry at least one of the weight-related FTO variants; and those of us carrying two are on average 3 kilograms heavier than those carrying none. Not only is FTO expressed primarily in the hypothalamus, but it is associated with observational measures of food responsiveness measured at test meals,25 and with satiety responsiveness as measured by the CEBQ.26 Many of the other variants discovered through GWAS are also expressed in the hypothalamus, suggesting that common genetic variants, like the rare mutations, influence body weight through eating behaviour. However, as yet relationships between these other common variants with eating behaviour have not been explored.

Although research has made headway in establishing that eating behaviour, like weight, has a strong genetic basis, we still know very little about the specific genes involved. A good starting point would be to explore whether the weight-related common genes identified so far are also associated with eating behaviour. The biology linking genes to behaviour also needs to be characterized. In addition, it is crucial to test the feasibility of modifying eating behaviour in individuals who are genetically susceptible to obesity. There has been little research into modifying eating behaviour so far, but some studies are promising. Epstein and colleagues succeeded in slowing the eating speed of 7 year old children over a 6-month period by encouraging them to put their knife and fork down after each bite.27 Another study demonstrated that it is possible to train 4-5 year old children to become better at recognizing and attending to their internal satiety sensations.28

Twins studies have established that differences between individuals in eating behaviour is explained partly by genetic variation, in typical western societies at this time; although the actual genes involved remain to be identified. Twin studies have also shown that the same genes which influence eating behaviour also influence weight, suggesting that the size of an individual’s appetite ultimately influences their vulnerability to obesity in the modern permissive environment. In support of this, the most important common weight-related gene (FTO) appears to influence body weight through its effects on satiety sensitivity in children. This so-called inherited behavioural susceptibility to obesity helps to overcome the seeming paradox of both genetic and environmental determination of weight. 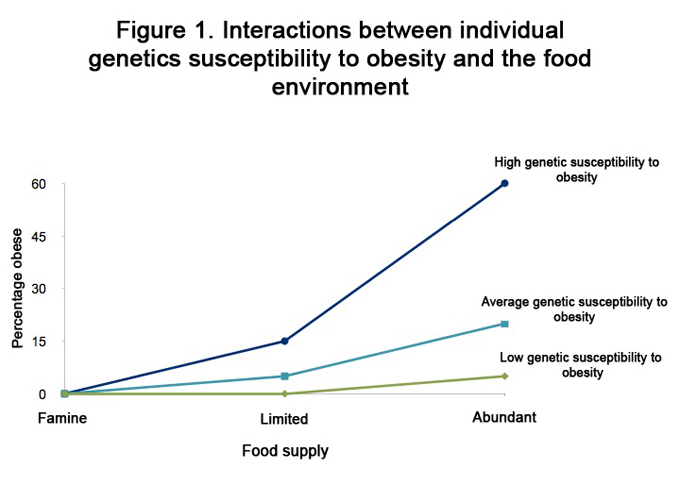 This research suggests that some individuals are more vulnerable to overeating in response to the multiple opportunities presented by the modern food environment, by virtue of their genes, and more likely to gain weight. This calls into question the notion of personal responsibility for obesity. It is a commonly held belief that a child’s weight reflects the rearing strategies of the parent. However, this research suggests that some children (more often those who have overweight parents and are therefore likely to have inherited higher risk genes.31 may find it harder than others to regulate their food intake appropriately because they have a more avid appetite, which is partly due to genes inherited from their parents. This can make it more difficult to resist over-consuming in response to the many eating opportunities presented by the modern environment.

[An effective strategy might be tighter state regulation of the wider food environment to reduce opportunities and incentives for overconsumption, such as removal of vending machines from schools, tighter control of food marketing to children, limitation of the number of fast food venues, and regulation of supermarket layouts.32 Parents can also modify the home environment – e.g., by cooking smaller amounts of dinner to remove the temptation for “seconds,” keeping problem foods out of sight (or better, out of the home), and teaching their children how to recognize feelings of fullness.