This topic aims to provide a better understanding of aggressive behaviour in young children, its normal course of development, when parents or caregivers should be concerned, and what policies, programs and interventions can be implemented to reduce its long-term incidence.

Aggressive behaviours: you can help to manage them

Discipline: how much is enough?

Most parents of first born are shocked and understandably worried when they see their infant child attempt to hit them when angry. Very few parents expecting their first child know that beautiful young babies express anger with hits and kicks long before they learn to walk. The frequency of physical aggressions increases with age over the first three to four years after birth. Physical aggression is the leading problem in child care centres and the leading reason why preschool children with behaviour problems are referred for clinical help. However, persistent physical aggression usually does not happen in isolation; it frequently co-occurs with other developmental problems like emotion dysregulation, impulsivity, inattention, and delays in language and communication skills. Studies that followed large cohorts of children over many years showed that persistent physical aggression increased the risk for later juvenile delinquency and adult violence.

Most children start using physical aggression between one and two years of age as a response to frustration and as a means to reach a goal. The first aggressive acts displayed with peers are often tugging at another child’s toy, soon followed by hitting. Physical aggression tends to increase in frequency until 30 to 42 months of age and then declines when children develop the ability to regulate their attention and emotions, control their impulses and use verbal communication to resolve conflicts and express needs. There are important differences between individual children in the early display of aggressive behaviour: a majority of children will act aggressively occasionally, a minority will display little or no aggression, and about 5% to 10% of children, mostly boys, will frequently use physical aggression. These children are at greater risk of chronic aggression into late childhood, adolescence and adulthood. Studies showed that chronic physical aggression is associated with social factors, namely mothers’ young age at first delivery, low education, history of behaviour problems, smoking during pregnancy, and low income. Inadequate parenting, conflict in the house, and parental mental health and substance abuse issues are also associated with children’s chronic physical aggression. The consequences of aggressive acts become more serious with age as children become stronger and are less supervised. Chronic physical aggression is a serious social concern because of its individual and social costs.

Most children will show physically aggressive behaviour occasionally, and then learn other means of expressing emotions and solving conflicts. A minority of children will not. Interventions at an early age aimed at helping these children to learn adequate behaviour and emotional responses are warranted.

Intervention can address the at-risk child’s developmental deficits directly (e.g., improving emotion regulation skills) or indirectly by changing the child’s environment (for example by providing parental training). Targeted programs combining parent and child intervention in the preschool years have resulted in improved parenting and decrease in children’s negative behaviour.  Interventions can be universal (offered to all children - e.g., a whole child care or kindergarten group) or target specific problems and the children who have them.  Prenatal to toddlerhood home visits to support at risk families have been shown to reduce later behaviour problems. Universal programs in preschool can improve children’s emotion regulation and reduce later aggression. A multi-modal intervention for aggressive boys in kindergarten was shown to improve high-school graduation and reduce criminality 15 years later.

Development of effortful control in early childhood is critical for the reduction of aggressive behaviours and impulses. Effortful control refers to the voluntary regulation of attention and behaviour, including inhibition of undesirable behaviour and activation of appropriate behaviour. It is linked to the development of conscience, empathy, and internalization of social norms. Poor effortful control is associated with reactive aggression, that is, emotionally-driven reaction rather than unprovoked aggression, and with externalized behaviour problems. Warm, positive parenting can help reduce behaviour problems but the effect of parental behaviour is facilitated by children’s effortful control. Interventions can address children’s problem-solving strategies, support gentle parental discipline, and foster supportive teaching.

Young children learn self-control, reciprocity and adequate behaviour in part through play with peers, specifically play that demands turn-taking, negotiation, shift in control and restraint like rough-and-tumble play. Studies in other mammals (rats and apes) showed that rough-and-tumble play is critical for the development of the brain area responsible for executive control. One consequence of lacking the opportunity to play in these animals is misreading social signals that could prevent an encounter from escalating into aggression. Human children who engage in rough-and-tumble play show better social skills and play with peer is facilitated by a positive previous experience of playing with parents. This suggest that encouraging play could help children develop the abilities that will help them control their aggressive impulses and assess correctly their peers’ reactions during interactions. When rough-and-tumble play is not socially acceptable, peer-play with similar properties (turn-taking, shift in control, self-restraint) should be encouraged.

Regarding indirect aggression, it should be recognized that social and relational aggression are seriously harmful behaviours perpetrated by both boys and girls. Intervention could start in preschool and preferably involve parents and teachers. The goals would be to teach how to deal with relational aggression, as well as strategies for relationship building and problem solving.

Whatever the strategy, several keys to successful intervention targeting aggression in preschool children are proposed: 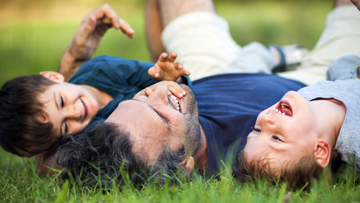 Why play-fighting can be good for children?

Play-fighting often makes parents and educators uncomfortable. It can lead to physical injuries and some believe it triggers aggressive or violent behaviours that can impair a child’s early development.

However, studies show that play-fighting, like all forms of playing, is an important source of learning for young children. It allows them, among other things, to:

In the end, the question is “where do we set the limit?” and the answer is: “play in a way that nobody gets hurt.”

Young Children’s Play Fighting and Use of War Toys

Best Practices in the Development of Effortful Control in Early Childhood

What should you do when children hit?

It’s normal for young children to hit and bite. As their brain develops and their motor ability increases, children will naturally express anger and aggression through such behaviours.

When children start hitting, biting, pushing or slapping, adults should:

With the support and guidance of parents and caregivers and by interacting with others, children will learn NOT to use physical aggression and to use more socially-acceptable behaviour instead.

Best Practices in the Development of Effortful Control in Early Childhood

What is all that crying about?

Origins of Human Aggression: The Other Story

Documentary - National Film Board of Canada - 2005

The Stockholm Prize in Criminology 2017