Injuries are the most important cause of morbidity and mortality for children in many countries. All injuries should be viewed as preventable, and this topic offers several simple and effective strategies for reducing the number of the most common injuries.

Falls are the most common injury event and occur when a person comes to rest inadvertently on the ground, the floor or from one level to another. Although falls result in minor bruises and bumps most of the time, injury rates from falls can also become fatal. In 2007, falls ranked first as the leading cause of non-fatal injury events among children under 14 years old in the United States. Worldwide, death and injury rates vary by country and child gender.

Road traffic injury (RTI) is defined as any collision or incident involving at least one vehicle in motion that leads to a fatal injury. It is estimated that more than one million people die each year from RTI. In fact, road-traffic crashes are projected to be the 5th leading cause of death by 2030. Pedestrians, cyclists, and young children are the most at risk of being involved in those incidents.

Drowning refers to a fatal incident caused by respiratory impairment after being submersed in a liquid medium. In most countries, drowning reaches its peak among children between 1 to 4 years of age. The number of drowning incidents is estimated to be around 30,000 deaths each year (especially high in low-and middle-income countries, and rural areas). In some parts of the world, such as Bangladesh, drowning is the most common cause of death for young children.

According to the World Health Organization, burns are “injuries to the skin or other organic tissue caused by thermal trauma”.1 It can occur when the skin is damaged by hot liquids (scalds), hot solids (contact burns) or flames (flame burns). It is estimated that more than 95,000 children under 20 years old died each year from burn related injuries. The population most at risk are children under five years living in low-and-middle income countries.

Poisoning is defined as exposure to a potentially harmful substance such as dangerous chemicals or medications. In the United States, more than 1,500,000 poisoning cases were reported in children (0-19 years-old) in 2009. Children under 5 have the highest rate of poisoning. The number of poisoning events tends to be higher in socioeconomically disadvantaged populations.

Risks factors related to fall injuries include children’s age and development as well as the environmental conditions in which they are living. While toddlers are more likely to fall from steps, stairs, and furniture, older children fall most often from playground equipment and heights (e.g., balconies, trees, roofs, and fire escapes). Other risk factors include the lack of parental supervision and the absence of home safety devices.

One factor explaining children’s heighten risk of being involved in RTI is their cognitive immaturity. Children need to first develop complex cognitive skills in order to reduce their tendency to act impulsively and to being able to gauge the appropriate amount of time for crossing a street. The recommended age at which children can safely cross the street by themselves is 10 years old. Another reason for the elevated number of RTI in childhood is the lack of use or misuse of child’s safety seats and seat belts. Correct use of seat restraints can reduce the RTI mortality rate by around 70%.

While infants are most likely to drown in body of water at or near home (e.g., bathtub, bucket), older children drown most often in pools or natural bodies of water close to their homes. Children’s risk of drowning is reduced when pools are isolated by 4-sided fences and when they have been enrolled in formal swimming lessons. The chance of survival increases when they are resuscitated immediately after the incident by parents or bystanders.

Risk factors for burn-related injuries depend on children’s age, gender, and the level of parental supervision. Infants are more likely to be burned from hot liquids and house fires whereas older children, and especially boys, are more likely to burn themselves when playing with fire or smoker materials (e.g., lighters). Poverty, substandard housing, and open cooking fires are important risk factors for burns.

Children are more or less likely to experience a poisoning event depending on: 1) their age and sex; 2) their behavioural characteristics; 3) the use of child safety measures such as child resistant packaging for poisons in the home; and the availability of old medications and poisons in the home environment.

The most common countermeasure to reduce fall injuries is the use of window locks or barriers for homes with floors above the ground level. Other effective strategies include the provision of stair gates, handrails, and the use of energy absorbing material under playground equipment. In terms of supervision-related strategies, parents should never leave a baby on a changing table without supervision and they are also encouraged to monitor children’s climbing behaviours.

For motor vehicle occupant injuries, the most important countermeasure is the use of seat restraints. From birth until they weigh about 10 kilograms, children should be restrained in rear-facing child seats. Children should be in forward-facing seats from then until about 4 years of age.  Then, booster seats must be used until the adult seat belt fits children properly (around 145 cm of height). Seats should be adjusted correctly and seat belt properly worn on each riding occasion. Finally, parents are encouraged to provide supervision until children are cognitively able to safely cross the street (around 10 years of age).

Passive strategies recommended to prevent drowning include: 1) installing a 4-sided fence surrounding the swimming pool; 2) placing a cover on a well; and 3) emptying water from large containers when not used. Although less effective than passive strategies, behavioural interventions should also be considered such as: 1) teaching a child how to swim (it reduces the risk of drowning by 40 to 88% for children between 1 and 4); 2) training lifeguards on beaches and at public swimming pools in CPR (cardiopulmonary resuscitation; and 3) wearing life vests when boating or in open water.

Prevention strategies to reduce burns include home safety education as well as the regular maintenance of smoke alarm installation. Parents should also ensure that matches, lighters, and hot liquids are kept out of young children’s reach. Furthermore, it is recommended that the temperature of hot tap water be reduced to prevent tap water scalds.

The most effective strategy to reduce poisoning is to prevent the child from getting to poisons and toxins in the home. Parents should throw out unused prescription medications and always use child resistant caps on medication bottles. Poisons such as kerosene and pesticides should not be kept in the home, always kept in their original containers equipped with child resistant caps. Finally, parental supervision should always be favoured to sibling supervision considering the latter tends to increase the risk of injury in young children. 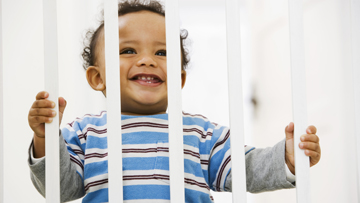 How can parents prevent child injuries?

The toll of injuries is high – they are the leading cause of death and illness in children. But the good news is that they can be prevented.

Generally, parents can prevent injuries in young children by creating an environment that is safe and not risky. The most common injuries can be prevented by:

Perhaps the most important first step in injury prevention is making parents aware of common injuries and ways to prevent them.