In the era of globalization, learning a second language during childhood can provide developmental and social benefits. This topic aims to further understanding of the impacts of bilingualism on children’s cognitive development and suggests the most favourable learning contexts.

How important it is?

Childhood bilingualism is a significant experience that has the power to influence the course and efficiency of children’s development.

The potential impact of bilingualism on children’s development has increasingly emerged as a crucial concern for modern societies, and for Canada in particular. In addition to the official commitment to a national policy of second-language acquisition and bilingualism, Canada’s immigration program has transformed the country into a rich multilingual and multicultural nation. Public schools are home to large numbers of children for whom English or French is a second language. It is therefore imperative that we understand the impact of these language backgrounds on children’s cognitive and educational futures.

Research has shown that, contrary to what many people once believed, bilingualism does not trigger confusion, has no inherent negative impact on children’s development and even has some socio-cognitive advantages. In particular, bilingual children show some advantages in understanding the beliefs of others and the communication needs of their conversational partners, picking out the important variables to solve a problem and entertaining two possible interpretations of the same stimulus at once. As well, they achieve higher scores than monolingual children on a number of cognitive ability tests, including mental flexibility, non-verbal problem-solving tasks, understanding the conventional origin of names, distinguishing between semantic similarity and phonetic similarity and the capacity to judge the grammaticality of sentences.

Second-language learners take a long time to develop their second-language oral proficiency. Even after five to six years of attending school in the second-language environment, children may not speak as fluently in the language as their monolingual peers. Parents and educators should also be aware that in the early stages of the acquisition of a second language, children who learn two languages may show some developmental lags relative to children who speak only one. However, these lags are typically small and do not last for long periods of time. In terms of general language proficiency, bilingual children tend to have a smaller vocabulary in each language than monolingual children in their language. Nonetheless, their understanding of linguistic structure is at least as good and often better than that of comparable monolinguals.

Research shows that it is possible to diagnose reading disability in second-language children rather early. In fact, delaying diagnosis and treatment of potential reading disability in second-language children is costly and has long-term consequences for children who have difficulties in learning to read and write in the school language. The profiles of at-risk readers include persistent and extremely poor performance on word recognition, pseudo-word decoding (units of speech or text that look and sound like words in a particular language but that are not actually words) and spelling tasks and concomitant poor performance on phonological processing measures (such as phonological awareness and rapid naming).

Phonological awareness (the ability to break words into their components, synthesize their sounds and learn their features), rapid naming and to some extent verbal working memory are sources of individual differences that are associated with reading development and reading difficulties in monolingual children. These processing skills measured in monolingual and second-language children often correlate with each other, and can predict decoding and spelling skills in both languages. This has been found across different language groups. As well, regardless of the type of orthographies (regularity of correspondence between letters or letter combinations and their associated sounds) involved, second-language learners who have decoding and spelling problems in their first language have difficulties in their second language as well. Finally, second-language learners who have serious problems with word-based reading skills and with the cognitive processes that are necessary to develop good word-based skills in the second language also have poor reading fluency, reading comprehension and writing skills.

Some second-language children may read with difficulty not simply because they require more time to develop their second-language oral proficiency but because they have problems with the acquisition of basic reading skills. It is important to look beyond oral language proficiency and not to delay assessment and intervention. Both health care providers and classroom teachers need to be trained and empowered to identify the warning signs early and to adapt instruction accordingly.

Since there are positive and significant correlations between monolingual and second-language reading skills and predictors of successful reading developments, a lot can be learned about a second-language learner’s reading ability by using the same assessment measures as one would use for a monolingual child. Gaps between listening comprehension and reading comprehension and data about the child’s performance in the home language are also important information that should be assessed.

Other sources of information can contribute to the validity of the diagnosis, such as report cards from the home country, interview data on the achievement of developmental milestones (particularly the onset and development of language), previous assessments, and the language and academic achievement of siblings. It is also essential to consider the family cultural and linguistic background, acculturation and parental attributions about their children’s academic difficulties.

Because there is no evidence that bilingualism has a negative impact on children’s intellectual and socio-emotional development, parents can be encouraged to speak their native language at home and allow their children to learn the majority language in school. The evidence for the overwhelming positive benefit of bilingualism, together with evidence that bilingual children are not cognitively handicapped, indicates an important role for schools. They can provide a means for these children to build up their language skills in the school language, enabling them to become full participants in the classroom and reap the benefits of their educational experience.

Findings on bilingualism and its effects on socio-emotional development suggest this is another area that should be explored. As well, because language can function as a cure for retrieval of personal experiences that may play a key role in the diagnosis and treatment of various mental health conditions, policies encouraging bilingual health services should be promoted. 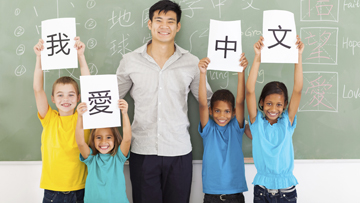 How does being bilingual benefit children?

Many children grow up hearing and using more than one language. Knowing two languages has some significant linguistic and socio-cognitive advantages.

In Canada, large numbers of children in public schools speak English or French as a second language. Understanding the impact of these language backgrounds on children’s cognitive and educational futures is essential.