Moving to a new country is a significant event in a child’s life. It is important to have a good understanding of the factors — both in the host society and in the immigrant family — that create opportunities, benefits, and difficulties in the development of immigrant children.

According to the International Organization of Migration,1 approximately 200 million people are currently living outside of their country of origin. Reasons for this physical relocation include financial insecurity, political instability, educational opportunities, and demographic growth. Cultural and psychological changes in customs, language, and values (i.e., acculturation) resulting from contact with a different culture are likely to vary depending on the individual’s wish to maintain their culture of origin and to adopt the culture of the mainstream society. People who are highly engaged in both the heritage and mainstream cultures (i.e., integration) tend to adapt more easily to the immigration process in comparison to those who have an exclusive orientation toward their heritage culture (i.e., separation). These two acculturation strategies are especially relevant for children and adolescent immigrants. Indeed, as immigrant children move into adolescence, they become increasingly engaged in the larger society and their relations with each cultural context play a considerable role in shaping their self and identity. Given that immigrant children will eventually represent a considerable proportion of workers in many affluent countries, it is important to promote their well-being, development, and success.

Data obtained in longitudinal studies conducted in Canada during the 1980s and 1990s2 provide evidence that immigrant children may be less likely to experience emotional and behavioural problems than non-immigrant children (4- to 11-years-old). Despite their increased likelihood of experiencing social and economic adversity, first-generation immigrant children may be more resilient due to protective individual, situational, and family factors. Examples include 1) a lower likelihood of affiliations with deviant peers; 2) a strong ethnic identity; 3) living in neighbourhoods with higher concentrations of firstgeneration immigrants; 4) living in a two-parent home; and 5) low levels of parental mental health problems and risk-taking behaviours. However, these protective factors seem to dissipate over time and reach a level similar to non-immigrant children, therefore providing an explanation as to why there is generally declining mental health across successive generations of immigrant children. This loss in resilience may also be intensified by parent-child conflicts. Parents and children do not always share the same attitudes and behaviours towards adopting the values and beliefs of the mainstream country. Because immigrant children are exposed to socialization agents other than their family members such as their peers, teachers, and professionals, they learn and adapt more rapidly the customs and language of the mainstream culture. In fact, results from a longitudinal study conducted in the United States suggest that immigrant adolescents who are fluent in both their parents’ home language and the language of the settlement country, and who navigate fluidly between the two social and cultural contexts adjust more successfully.

Immigrant children’s integration is also driven by their desire to be accepted by their peers. By forming friendships with children of the mainstream culture, immigrant children learn and adopt the customs and socio-cultural values of the mainstream society (e.g., engaging in unsupervised activities during adolescence). However, immigrant parents are often resistant to these changes and continue to value the importance of cultural maintenance (i.e., customs from the heritage culture). This acculturation gap is likely to complicate communication and mutual understanding between the two generations, in turn increasing tension and conflict.

Lastly, parents may experience further loss in parenting practices when dealing with the education, mental health, and child welfare system. Given that many immigrants arrive into countries where school options, policies, and language differ from their country of origin, immigrant parents are likely to be misunderstood by service providers who are not familiar with the family’s heritage culture, thereby undermining parents’ capacity to help their children with school work.

Just as immigrant families learn the language and customs of the mainstream culture; it is important that service providers and policy makers increase their knowledge of immigrants’ cultural beliefs and expectations about child development. The latter may have customs, rituals, and parenting practices different from the mainstream society and those may influence children’s normative development. Clinicians should be aware of these differences to better understand immigrant children’s needs and strengths. In order for immigrant families to benefit from adequate community services, providers in education, health, and other organizations are also encouraged to provide out-reach and interpretive services in the home languages of children and their families. By reaching out to immigrant parents and orient them to their children’s schooling in their new culture, school personnel may reduce acculturation gaps between the two generations. Not only would parents increase their knowledge about the school system, but also they would have a better idea of what is expected of their children. However, education policies, programs, and curricula for first generation adolescent immigrants with little or no experience in schools must address different issues than policies for first generation immigrants who obtained most or all of their education in the mainstream culture. Finally, tolerance of cultural diversity in the mainstream society, as reflected by policies, public discourse, and low perceived discrimination, is necessary in order to promote partnerships between two cultures. 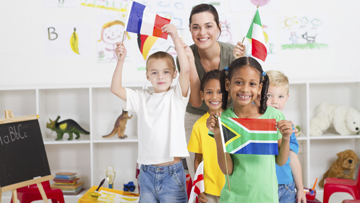 What factors influence how well an immigrant family functions?

Immigrant families have more problems adapting when they are only oriented toward their heritage culture.

Adapting is smoother when immigrants are engaged in both the heritage and mainstream cultures.

Service providers can help reduce the gap between the two generations by reaching out to immigrant parents to orient them, for instance, in the school system, increase their knowledge of what is expected of their child and promote partnership between the two cultures.