This topic examines the most recent data surrounding immunization: potential side effects, myths and fears, measures put in place to ensure vaccine safety, and the impact of immunization on childhood diseases in the world.

The World Health Organization (WHO) and UNICEF estimate that 100 million children receive at least basic immunization, saving about 2.5 million lives each year. It is estimated that complete vaccine coverage of children could save an additional 2 million lives. Moreover, immunization reduces demands on health care systems and helps avoid neurological complications associated with diseases such as measles, mumps, rubella, and even chickenpox. Vaccines are given to young children during a time of rapid developmental changes. It is also in early childhood that neurological defects and behavioural syndromes are detected. Because neurological disorders are often diagnosed a short time after children receive vaccines, many parents and health professionals fear that the vaccines could be the cause of these developmental problems. This and other concerns have led to a large amount of research on the possible side effects of vaccines and also on the other causes of neurological and behavioural problems in young children. Based on this ongoing research, the purported association between vaccine and autism is now considered refuted, and it is now known that almost all neurological disorders that used to be attributed to vaccines have in fact other causes. The scientific consensus today is that vaccines are among the safest pharmacological products, that their side effects are almost always mild, and that their benefits far outweigh their potential risks.

In the absence of large-scale immunization, highly infectious diseases such as measles, mumps, rubella and chickenpox affect nearly all children. Although these infections are usually benign and resolve quickly without particular treatment, a significant number of infected children will develop complications requiring hospitalization. Complications often affect the central nervous system and include seizures and encephalitis, an acute inflammation of the brain that can result in permanent brain injuries. For example, 1 person out of 25-30 affected with measles will develop seizures, and 1 out of 1000 will suffer from acute encephalitis. In a population of millions of individuals, these numbers translate into thousands of children with residual brain injuries, developmental delays and ongoing seizures. Mumps complications can cause deafness, and rubella has devastating consequences for babies born after being infected in the womb, like brain malformation, blindness, deafness and seizures. Chickenpox can also be complicated by injury of the central nervous system with lasting consequences. A number of viruses and bacteria can cause an inflammation of the meninges, the membrane that protects the brain, which is also a risk for permanent brain damage. Pertussis (whooping cough) can occasionally cause encephalopathy, probably because long bouts of coughing can affect brain oxygenation. Most of these illnesses have become rare in North America and Europe since vaccination has been widespread but remain frequent in much of the world, one plane flight away.

Can vaccines cause harm?

Some parents fear that vaccinating healthy children can harm them. Monitoring programs of reported adverse events following vaccination have been set up to answer this question. When an adverse event is reported following vaccination, it can have many causes (i.e., it can be caused by the vaccine, by an inappropriate use of the vaccine or by a completely independent cause). The most frequent side effects of vaccines are fever and febrile seizures. For example, about 5% of children will have fever after receiving the Measles-Mumps-Rubella (MMR) vaccine. The fever will be high enough to trigger febrile seizure in about 1/3000 children, especially children with a family history of seizures. Febrile seizures are scary to witness for parents but fortunately, they usually have no lasting effects. Some children with pre-existing immunodeficiency developed encephalitis after receiving the MMR vaccine, so children with a compromised immune system should not receive vaccines like MMR which contain live viruses.

Most neurological disorders previously attributed to vaccines are in fact explained by another cause. Some children who appeared to have developed a neurological disorder after pertussis vaccination were found to have a rare genetic mutation associated with a form of childhood epilepsy called Dravet syndrome. At most, the vaccine may have precipitated the unavoidable onset of the disease. Thus, we know that vaccine-preventable diseases frequently have severe consequences, while the consequences of vaccines are rare and almost always benign.

Science does not support the association between autism and MMR, which should reassure concerned parents. Scientific research also found no link between pertussis vaccines and encephalopathy. However, fear of the MMR and other vaccines remain present, and vaccine refusal recently led to measles outbreaks in the United States, affecting mostly unvaccinated persons.

The severe complications caused by vaccine-preventable diseases are well-known to health professionals. However, since the incidence of these diseases has fallen sharply in many countries after the implementation of large-scale vaccination programs, today’s parents are not always familiar with their potential consequences. When diseases are prevalent, they are feared more than the vaccines that can prevent them; when the diseases are rare, parents tend to fear the potential side effects of the vaccines a lot more than the diseases themselves. Therefore, it is important to document the side effects of vaccines as well as their benefits, study their potential risks, and give parents of young children up-to-date, research-based, quality information about immunization.

All vaccines are extensively tested before they are administered to the public. Still, some side effects are so rare (affecting less than 1/10,000 patients) that no preliminary study can be large enough to detect them. For this reason, the medical authorities must maintain the structures necessary for vaccine pharmacovigilance: to ensure the safety of the vaccines, all adverse events following immunization should be recorded, compiled and investigated. The ongoing research on vaccine safety is also essential to establish guidelines for the management and administration of vaccines.

Knowing the true cause of illnesses appearing after vaccination should reassure the parents about continuing the vaccine program for their child and is essential to ensure that the child will receive the best possible care. Future research should aim to collect enough data to make sure that even the rarest adverse events are recorded. Research should also investigate factors, for example genetic factors, with potential to increase the risk of adverse reaction. 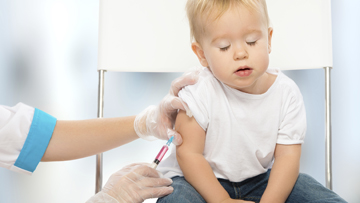 What are the myths and misconceptions around immunization?

Since neurological disorders often happen to be identified shortly after the time children receive their immunizations, this coincidence leads many parents and health professionals to fear vaccines might be the cause.

However, a significant amount of research shows that most of neurological disorders that used to be attributed to vaccines have in fact other causes. For example, numerous studies over the past 14 years have refuted the link between autism and the MMR (measles, mumps and rubella) vaccine. Research has also found no link between pertussis vaccines and encephalopathy.

Despite this, for many parents vaccine safety is not a scientific issue but rather an emotional one not easily overcome. Given the resurgence of some nearly eradicated diseases as a result of under-vaccination, there’s still much work to do to overcome dangerous myths about vaccines.

“What Else Could It Be?” When Neurologic Disorders Follow Immunization

The Myth of MMR and Autism Debunked