We know that premature infants are at higher risk of developmental problems and other biological vulnerabilities. Although premature births are impossible to predict with certainty, it is important to be aware of potential problems and the ways to mitigate these adverse effects.

In 1948, the World Health Assembly recommended that all infants with birthweights of 2500 grams (5 pounds 8 ounces) or less, or a gestational age of less than 37 completed weeks, be considered immature or premature. At greatest risk are infants born at 32 weeks or earlier (as early as 23 weeks of gestational age in some cases), and at weights under 1500 g (in some cases weighing as little as 400 to 500 grams).  These very low birthweight (VLBW) infants, make up around 8% of live deliveries in Canada. These infants account for the majority of deaths in infancy.

The preterm birth rate has been increasing over the last 20 years, particularly due to the increasing use of assisted reproductive technologies, which has consequently led to an increasing rate of multiple pregnancies.  Nevertheless, infant mortality rate has declined sharply and the survival rate for VLBW infants has risen dramatically since the introduction of neonatal intensive care in the early 1970s. Therefore, there has been increasing concern about the potential developmental problems associated with prematurity.

It has long been established that premature infants are at higher risk of developmental problems. These problems are linked to the fact that biological functions (such as the central nervous system and lungs) were unable to reach complete maturity during pregnancy. Incidentally, after birth, the interaction between this biological immaturity and the physical and social environment of the child plays a crucial role in his or her development.

Generally, the lower the gestational age, the higher the impact on biological functions will be. VLBW infants (born at 32 weeks or earlier and weighing less than 1500 grams) are medically fragile and can suffer from many complications. Early studies focused on neurodevelopmental issues, such as cerebral palsy and cognitive delay. Premature infants are also at increased risk for congenital malformations, hearing and visual deficits, reactive airway disease, growth failure and behaviour problems.  Among VLBW infants, about 10% will have cerebral palsy and 15% will have an IQ in the mentally deficient range.

Premature children with very low birthweights or significant medical complications show more problems with temperament in infancy and toddlerhood. These infants give their caregivers behavioural cues that are faint and much more difficult to interpret than cues given by term-born infants. They demonstrate less adaptability, rhythmicity, activity, attention and persistence than full-term infants. They also tend to be more intense in their moods, more difficult to soothe, more passive and less socially responsive. At preschool age and in the early school years, increased activity and intensity, and lack of persistence remain. This difficult temperament may lead to delayed or impaired self-regulation. However, these temperamental problems seem to be less present in children born at more than 32 weeks of gestational age.

As well, VLBW children have been found to exhibit a variety of emotional and behavioural problems, such as anxiety disorders, excessive shyness and withdrawal, social problems, poor adaptive skills and especially attention deficit hyperactivity disorder, Almost 30% will have clinically significant behaviour problems, generally related to attention deficit. In fact, these children are at more than twice the risk for developing attention deficit hyperactivity disorder, and 25% to 60% will experience difficulty in school, leading to grade repetition or requiring special education services. However, they do not appear to be at risk for developing conduct disorders.

Interaction between biological and socio-environmental factors

It is uncertain whether morbidity from neonatal complications is entirely attributable to prematurity per se. Most researchers think the consequences of prematurity are due to the interaction between the impact on neurological maturation (i.e. the brain has not had a chance to develop fully) and early parent-child problems (caused, for example, by the strain of caring for a very fragile infant or by difficulty in recognizing certain behavioural signs that are harder to identify in premature infants) that consequently affect the development of the child’s social and cognitive functions. The initial hospitalization of premature infants may result in extended separation from parents, increased anxiety and possible interference with parent-infant attachment. Moreover, children born prematurely often continue to experience physical health problems that may require frequent medical visits and re-hospitalization. This may limit their participation in regular childhood activities, which in turn may affect their development of social skills. As well, continuing parental worry that the prematurely born infant is at risk for medical and developmental problems may reflect “vulnerable child syndrome”. This syndrome may be associated with less effective parental behaviour, such as overprotectiveness, maternal separation anxiety and failure to set limits, as well as child behaviour problems, such as social withdrawal, somatic complaints, and aggressive and destructive behaviour.

The impact of adverse environmental conditions such as poverty, maternal depression and family stress on behavioural problems may be greater in premature children. On the other hand, when the mother is more responsive to the child’s cues (which are more difficult to detect in these children), VLBW children do better in terms of intellectual and social competence in early childhood.

Unfortunately, we still do not know enough to accurately anticipate the developmental trajectories of these children. More research in neurology and clinical neuropsychology would give us a better understanding of the impact of prematurity  on the evolution of various neurological functions. As well, extended research on associated psycho-social factors seems equally important.

While the best way to decrease developmental and physical morbidity due to prematurity would be to reduce the number of such births, our current understanding of the causes of pre-term delivery is too limited to make this feasible. However, there are a number of promising avenues for mitigating adverse outcomes.

First, whenever possible, pre-term infants should be delivered in a hospital equipped to deal with both mother and infant to ensure high quality health services and reduce the risk of complications. Second, continued attention is needed to support normal physical and psychological development in the intensive care unit, for example by ensuring that the infant is not overexposed to loud noises or intense light. Finally, continued attention is needed to identify appropriate support measures for the family during and after the infant’s stay in the intensive care unit.

Two of the most thoroughly researched family-centred interventions for pre-term infants are the Newborn Individualized Developmental Care and Assessment Program (NIDCAP), which starts at birth and ends at hospital discharge, and the Infant Health and Development Program (IHDP), which begins at hospital discharge and ends at the child’s third birthday.

The goal of NIDCAP is to prevent unexpected sensory overload and pain, and enhance strengths and competence. The approach focuses on a detailed reading of each individual infant’s behavioural cues. Repeated formalized observations of the infant’s reaction to different types of stimulus (e.g. caregiving,) are used to help caregivers make appropriate and continuous adjustments.  Environment and care are adapted to enhance each infant’s strengths and self-regulation collaboratively with the infant and parents, who play the primary role in providing daily nurturance and helping their infant develop trust.

The program has shown positive effects on indices of infant health, with some studies reporting improved lung function, feeding behaviour and growth, and shorter hospital stays. There have also been reports of positive effects on cognitive and behavioural outcomes, as well as on the brain structure itself, still in development at this early age. Because it helps lower parental stress and enhances parental competence, NIDCAP is also likely to foster more functional mother-infant relationships and better parenting. This may in turn have an impact on the developing brain, enhancing the child’s cognitive, motor, behavioural and psychosocial development later in childhood. Randomized control studies on NIDCAP should focus on assessing these outcomes.

Introduction of NIDCAP, however, is not a trivial process and involves investment at all levels of the organization, from physical changes in the neonatal intensive care unit to substantial educational efforts and changes in the practice of care. As well, the complexity of the intervention makes it difficult to achieve an optimal experimental design for evaluation.

The Infant Health and Development Program (IHDP) was a multi-site, randomized clinical trial carried out in the United States in the late 1980s, aimed at reducing developmental problems in premature infants. It sought to enhance parenting resources for families and the development status of infants by providing pediatric, educational and family support services (e.g. home visiting, educational programs, support groups for parents). By teaching appropriate developmental stimulation and interactional skills, the goal of the program was to maximize positive social interactions between the child and his or her care-giving environment within the first three years of life.

At age three, when the intervention ended, results showed that the IHDP was effective in improving cognitive and behavioural development, especially for the heavier infants (those weighing between 2001 and 2500 grams at birth) and those at higher socio-economical risk. Fewer behavioural problems, more pro-social and mother-infant interactions, as well as better parenting skills were found.  The effects appeared to have attenuated by five and eight years of age, although this may have been because families living in poverty were unable to sustain the enriched environmental supports needed.

It is unlikely that any single intervention would developmentally “inoculate” a child permanently. The combined action and interaction of multiple factors – biological and socio-environmental –need to be taken into account.  The research suggests that there needs to be a commitment to a developmentally sensitive continuum of support from birth through adolescence. 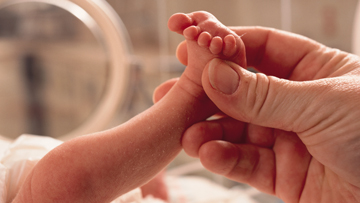 What health and developmental risks do premature babies face?

All infants with birthweights of 2500 grams (5 pounds 8 ounces) or less, or a gestational age of less than 37 completed weeks are considered immature or premature. They are at risk for a number of potential health and developmental problems, including:

Preschool age and in the early school years:

Fortunately there are some promising ways to mitigate some of these outcomes in premature babies.

Prematurity and Its Impact on Psychosocial and Emotional Development in Children