Nutritional experiences in early life can have long-lasting consequences. To encourage the adoption of healthy eating habits, this topic explains the usual development of eating habits and how to distinguish common and often temporary eating problems from chronic disorders.

Oral motor skills such as sucking and chewing develop rapidly during the first year, allowing young children to discover an increasing number of foods and textures. Refinements in fine motor skills also allow infants to develop more autonomy in regards to feeding, and by the end of the second year, most children have acquired good feeding skills. At this age, children become increasingly influenced by external signals such as family, friends, and society, to dictate their hunger.

Feeding problems are common, and touch approximately 25% to 50% of young children. These problems are usually minor and temporary. They tend to be seen when children are exposed to new foods or events during mealtime, or when they are trying to master a new feeding skill. However, 1% to 2%of children experience chronic feeding problems, including overeating, malnutrition, problematic behaviours during meals and atypical eating choices. These problems are especially common in children born prematurely, and those with developmental disabilities. Eating problems can be highly stressful for parents and can result in a strained parent-child relationship.

Early feeding experiences can have long-lasting consequences on eating habits and food preferences later on in life. A healthy diet consisting of ample fruits and vegetables in the first two years may increase future preferences for healthy food. In contrast, unhealthy habits, such as favoring food that is high in fat and sugar tend to persist over time.

Feeding problems are associated with a number of poor developmental, psychological and health outcomes. For instance, children who overeat are more likely to develop medical conditions and potential psychological issues, whereas insufficient calorie intake can result in stunted growth.

Several factors play a role in the development of feeding problems. Feeding difficulties are likely to emerge when feeding has been paired with a painful or unpleasant experience that the child comes to associate with mealtime. Temperament traits such as the inability to self-regulate and to communicate one’s hunger level can make feeding routine challenging. Similarly, a genetic predisposition for big or small appetite can increase the likelihood of feeding problems.

Parents play a central role during feeding throughout the early years. Breastfeeding, for instance, not only protects against contagious diseases, but also allows infants to develop the ability to control their own calorie intake, an important healthy eating habit. Parents also contribute positively to their child’s feeding by modeling healthy eating habits and making mealtimes enjoyable.

When feeding problems emerge, mealtimes can become loaded with anxiety and frustration for both children and parents. Misreading the child’s signals can further aggravate problematic behaviours. Strategies to encourage eating such as punishment, distractions, and toys can work temporarily, but they tend to worsen problems over time. The most effective approach is responsive feeding, where reciprocal interactions during meals are based on the child’s signals, and are age-appropriate.

At a larger scale, culture also contributes to feeding experiences by its influence on feeding choices, behaviours and exposure to different types of food. For instance, children’s exposure to advertisements of unhealthy food is related to their preference for this type of food, and this is especially problematic in the African American and Hispanic American communities.

Given that feeding problems most often originate from multiple causes, multidisciplinary approaches that consider cultural and temperamental differences are strongly recommended. Although not all children respond equally well to interventions, several strategies have been successful at promoting a healthy diet, starting with those involving parents. Parents can help reduce overeating by cooking smaller quantity of food per meal, thereby limiting access to oversized portion, and by encouraging their children to slow down their eating speed by putting their utensils down after each bite. Parents can also encourage healthy habits by discussing feelings of satiety, modelling healthy eating habits, and limiting the amount of television watching to 1 to 2 hours a day of quality programming, and only in children over 2 years. Parents who discuss the content of advertisement messages and who regulate the type of food their young child eats are likely to be successful at discouraging unhealthy habits.

In cases of insufficient calorie intake, medications that increase appetite have been shown to positively affect weight gain, and can make psychosocial intervention more efficient. The acceptance of new foods can also be encouraged by pairing the new food with a preferred food until the new food becomes familiar. To make mealtimes pleasant, children should be given enough time to eat (between 10 to 30 minutes) and proper equipment (ex., highchairs, and small utensils). Feeding is an intricate skill that takes time to develop. Parents and professionals can be about the specific impact of problematic feeding behaviour and motivation. Information about healthy habits can be transmitted to parents during regular health check-ups.

At the policy level, several steps can be undertaken to reduce accessibility to unhealthy foods. These include the elimination of vending machines in schools, stricter advertising and menu regulations, quotas assigned to the number of fast food restaurants and changes in supermarket layouts. 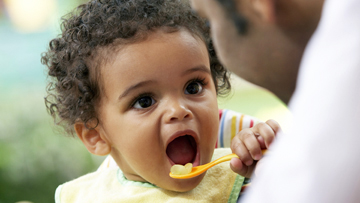 What is the role of parents in children’s healthy eating?

Parents play a key role in promoting healthy eating. Right from the start, choosing to breastfeed gives babies a nutritional boost and may help them learn to better regulate their food intake.

Finally, one of the best ways for parents to encourage healthy eating is by being a good role model.

Nutrition and ECD: Do we have the right recipe?