It is important to understand the genetic and environmental factors that can influence school success, right from conception. It is also important to document the impact of preschool programs on a child’s future academic performance and the best practices for fostering school success and completion. This topic does both.

School completion has lifelong implications, and is especially crucial in industrialized societies that are highly dependent on an educated workforce. In Canada, roughly one in five students has still not received his/her high school diploma by early adulthood. In OECD countries, about 16% of students don't complete their secondary education.1 In Latin America and the Caribbean, one out of six children no longer attends school by the age of 14 at the latest. The dropout rate is even higher amongst older pupils.2 These alarming statistics have important consequences for both the individuals and society as a whole. In contrast to high school graduates, non graduates (i.e., dropouts) are more likely a) to experience increased difficulty finding a job, b) to be recipients of welfare and unemployment insurance, c) to experience more physical and mental health problems, d) to be less involved in their communities, and e) to become parents of children who are at increased risk of experiencing problems at school and dropping out as well; in turn reinforcing a negative cycle. At the societal level, it is estimated that a single high school dropout can cost between $243,000 and $388,000 (US$). Given the association between early school dropout and these negative personal and financial consequences, it is thus imperative to understand pathways toward academic success and school completion and to identify both child and environmental risks and protective factors.

Early childhood represents a critical developmental period during which children develop an array of pre-academic skills (e.g., reading, letter recognition) and social-emotional abilities (e.g., ability to follow instructions, inhibit impulses, regulate emotions and focus attention), which prepare them to adjust well in school and to profit from their learning experiences. However, depending on a variety of factors, some children experience deficits in school readiness and begin school already behind their same-age peers in terms of basic cognitive and social-emotional skills. It is estimated that 26% of children in Quebec have significant cognitive and social-emotional deficits at school entry. In turn, these children who also manifest poor language and literacy skills (e.g., difficulties recognizing and using the sounds of spoken words) are at increased risk of experiencing academic difficulties. Likewise, children who have difficulty socially (e.g., getting along with peers and teachers), emotionally (e.g., controlling negative emotions), and behaviourally (e.g., inattention, aggression, opposition) demonstrate poorer school adjustment and performance. Unfortunately, this “achievement gap” does not disappear with schooling but rather widens over time, and may ultimately decrease students’ motivation while increasing their likelihood of early school departure.

Children’s learning difficulties and behavioural problems at school entry are not merely influenced by their personal characteristics, but also by the family dynamic during the preschool years. Parents of dropouts are typically less involved and demanding with their children, provide less educational support, and are less likely to model education attainment. Depending on their own educational and/or cultural background, they may also have limited abilities to help their children develop early skills that are conducive to learning. Finally, harsh, inconsistent or coercive parenting can impair children’s development of emotion-regulation and impulse control.

In spite of these risk factors, there are several protective factors to early school dropout. For instance, participation in early childhood education (ECE) programs may improve children’s school readiness and school achievement. In addition, positive relationships with peers and teachers can protect children against school dropout as it is associated with school engagement and motivation, two important predictors of high school completion that are independent of academic performance. Finally, children’s school adjustment can also be facilitated when a positive home-school partnership exists, and when parents complement classroom learning with positive home learning experiences.

Considering that nearly 64% of mothers of young children are in the workforce, both in Canada and the United States, and that the majority of children under the age of five spend time in some form of child care, there is a need to develop high-quality and effective early childhood education programs. Typically, the most effective programs share the following characteristics:

Finally, in order to ensure accessibility and affordability of these programs, policies need to be developed to encourage widespread participation in ECE by children from diverse backgrounds. Likewise, policy-makers need to review existing school policies and practices to examine to which extend they may be contributing to early school difficulties that eventually lead to high school withdrawal (e.g., grade retention policies). 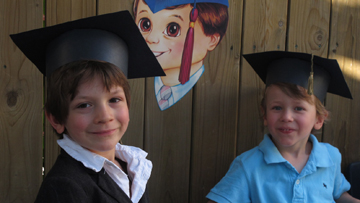 What can hinder school success in young children?

The trajectory to school success starts as soon as children are conceived, and are influenced by genetics and environment. By preschool, we can predict which children will have behaviour and learning problems in elementary school, based on their individual characteristics, their parents and the family dynamic.

Predictors of academic problems include:

These risk factors combine additively or interactively in predicting school difficulties. Importantly, some of them can be overcome or mitigated by good social skills, close peer and adult relationships, and positive but firm discipline.

School Completion/School Achievement as Outcomes of Early Childhood Development: Comments on Vitaro and Hymel and Ford