Breastfeeding is widely recognized as the optimal way to feed a baby. Its positive impacts can be seen not only on the infant, but also on the mother, the parents and, ultimately, the health-care system.

Breastfeeding is widely recognized as the recommended method of infant feeding worldwide. The World Health Organization (WHO) has identified exclusive breastfeeding as the optimal feeding regime for children. Exclusive breastfeeding refers to feeding the infant only breast milk—nothing else, not even water—for six months, followed by continued breastfeeding with appropriate complementary feeding up to and beyond two years of age.1

Breastfeeding has a positive impact on the infant, mother, parents and the health-care system; it also reduces the costs to society of raising healthy children who reach their full potential. For infants, breastfeeding can affect nutrition, growth and development, and offer protection from infection, allergies and some chronic diseases.

Breastfeeding has been shown to have a positive effect on the physical health of children, as well as their early behaviour and relationship with parents. Even long after breastfeeding has stopped, its influence can be seen in the child’s emotional, intellectual and physical development.

To date, research has provided clear support for the nutritional and health benefits of breastfeeding. Breastfeeding has a major impact on rates of disease and death, particularly in developing countries. It protects against gastrointestinal and respiratory infections and is associated with a reduced incidence of childhood-onset chronic diseases, such as diabetes, celiac disease, Crohn’s disease and some childhood malignancies. It also protects against allergies, with immunological protection continuing as long as the child is breastfed.

Breastfeeding can affect the early behaviour of infants and have a positive impact on the parents as well. Breastfeeding can result in closer parent-child relationships. Compared to formula-fed infants, breastfed infants may be more alert, cry less, and be better able to engage in interactions with their parents. Mothers who breastfeed have lower levels of perceived stress and negative mood and higher levels of maternal attachment; they also tend to see their children as more reinforcing compared to mothers who formula feed.

Breastfeeding has been found to affect several aspects of children’s development. Specifically, it has been shown to improve children’s vision, an indication of breastfeeding’s positive effect on the development of the central nervous system. Research indicates that breastfeeding also affects motor development: children who are breastfed show an earlier ability to crawl and perform the “pincer grip,” after adjusting for potential confounding variables.

Breastfeeding plays a significant role in the social and emotional development of children as well. Research shows that children who have been breastfed are more outgoing, socially secure and more advanced on the developmental scales. Being breastfed exclusively for at least four months has been shown to have a positive effect on children’s intellectual development, even when controlled for mothers’ demographic variables.

Some positive effects associated with breastfeeding continue throughout a child’s development, even after the feeding practice has ended. For instance, it has been consistently associated with prevention of childhood/adolescence obesity, a condition that can harm the child’s self-esteem and socio-emotional development.

Investing in breastfeeding promotion is likely to lead not only to improved physical health but also to improved intellectual and psycho-emotional outcomes for children. Clinical services and public-health policies that promote exclusive breastfeeding for the first six months of life are likely to yield important benefits for early child development.

For breastfeeding practices to improve, there needs to be support at every level: supportive frameworks should exist within public policy, law, the health-care system, communities, families and friends.

At the highest level, we should develop a national policy that follows the WHO Code of Marketing (International Code of Marketing of Breast-milk Substitutes), which prohibits the marketing of breast milk substitutes on television, radio, or in print materials, as well as the distribution of free formula samples. There is also a need to fund further research on the impact of breastfeeding on psychosocial child development.

The legal system also has a role to play by supporting the WHO Code and through labour laws that promote working conditions consistent with six months of exclusive breastfeeding (such as longer periods of paid leave, as well as child care and breast milk facilities at work).

Health-care facilities are in a unique position to teach new mothers good breastfeeding techniques. To help mothers initiate and maintain breastfeeding, health facilities where birthing takes place should adopt WHO and UNICEF’s “Ten Steps to Successful Breastfeeding” as part of the International Baby-Friendly Hospital Initiative. In addition, well-trained, experienced peer-counsellors could carry mothers through the perceived problems of the first few weeks.

Breastfeeding promotions, both within the health-care sector and in the community as a whole, are also important. The most effective ones are comprehensive, combining prenatal group discussions with postnatal home visits.

At the broadest level, women need the social support of friends and family; we need to progress to a point where breastfeeding is accepted as a social norm and a part of life. 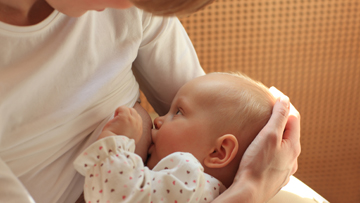 What are the benefits of breastfeeding for children and their mothers?

There are many good reasons for mothers to breastfeed – for the health of their child and themselves.

The benefits of breastfeeding are clear; the challenge is to find ways to support mothers to make the choice to breastfeed.

Influence of Breastfeeding on Psychosocial Development