This topic aims to help understand the close link between learning to talk and learning to read, their importance in children’s intellectual development, the learning mechanisms involved and the external factors that influence them, and signs that could indicate a learning disability.

Language: your baby’s first steps toward learning to speak

Learning to talk is one of the most visible and important achievements of early childhood. New language tools mean new opportunities for social understanding, for learning about the world, for sharing experience, pleasures and needs. Then, in the first three years of school, children take another big step in language development as they learn to read. Although these two domains are distinct, they are also related. Early-language skills have been linked to later successful reading. As well, pre-literacy and literacy activities can help further children’s language competencies in both the preschool years and later schooling.

When children have difficulty understanding others and expressing themselves, it is not surprising that psychosocial and emotional adjustment problems ensue. Children with delayed or disordered language are therefore at increased risk for social, emotional and behavioural problems. As well, research shows that most children who have poor reading skills at the end of Grade One will continue to experience difficulties reading later on.

While the nature of the mental activity that underlies language learning is widely debated, there is considerable agreement that the course of language development is influenced by determining factors in at least five fields: social, perceptual, cognitive processing, conceptual and linguistic. As well, although individual differences among children do exist, language development has predictable sequences. Most children begin speaking during their second year, and by 21 months are likely to know about 100 words and are able to combine them in short phrases. By age of four to six, most children are speaking in grammatically complete and fully intelligible sentences. Their first sentences are made of content words and are often missing grammatical function words (e.g., articles and prepositions) and word endings (e.g., plurals and tense markers). Although there is a predictable sequence, the rate of language development among children varies substantially primarily due to the complex interaction between genetic and environmental factors.

The amount and kind of language stimulation at home and family stresses such as child abuse contribute to children’s language development. As well, the quality of interaction between a caregiver and a child – such as when playing word games or reading books – plays an important role in literacy outcomes. Children’s skills progress more quickly and readily in instructional interactions characterized by sensitive, responsive and non-controlling adult input. Other aspects of parental behaviours, such as frequent and regular participation to learning activities and the provision of age-appropriate learning materials, favour the child’s literacy outcomes. In addition, parents with more resources (e.g., education, income) are more likely to provide positive learning experiences for their young child. Although child characteristics (e.g, birth order) also play a key role in their own learning experiences with firstborn children having in average a larger vocabulary than their later-born siblings.

Children with limited expressive vocabulary (less than 40-50 words) and who use no word combinations at the age of 24 months are identified as having slow expressive language development (SELD). These children are at higher risk for language impairment persisting into late preschool to elementary school years. In addition, children with impaired language development are at greater risk for later academic difficulties, learning disabilities, anxiety disorders, social difficulties, and behaviour problems. The most common behavioural problem is Hyperactivity Disorder (ADHD); studies also show high rates of internalizing problems such as shyness and anxiety. Children with speech impairments are more likely to have difficulty with phonological processing, phonological learning and literacy.

Phonemic awareness refers to the ability to identify, compare and manipulate the smallest units of spoken words, phonemes. During the first year, children are more sensitive to phonemes in their native language and are less sensitive to acoustic differences not relevant to their language. At the age of 7.5 months, the increased children’s brain response to their native language contrasts predicts later language skills. Phonemic awareness and vocabulary skills are, respectively, the best predictors of reading and reading comprehension. Some children are sufficiently competent in listening and talking, but have poor phonological processing abilities. At school entry, these children may be viewed as being at risk for reading disorder. There is a markedly disproportionate representation of children who are poor and who belong to ethnic or racial minorities among those who struggle with reading.

Early language interventions during infancy or the preschool years can have a significant impact on child outcomes. There are at least four general contexts in which language intervention can be provided: individual, small group, classroom and caregiver training. Four language-teaching strategies have been demonstrated to improve children’s language abilities. These are: prelinguistic milieu teaching, to help children make the transition from pre-intentional to intentional communication; milieu teaching, which consists of specific techniques embedded within a child’s ongoing activities and interactions; responsive interaction, which involves teaching caregivers to be highly responsive to the child’s communication attempts; and direct teaching, characterized by prompting, reinforcing and giving immediate feedback on grammar or vocabulary within highly structured sessions. In all cases, it is important to set the stage for language learning by creating opportunities for communication, following the child’s lead, and building and establishing social routines.

In parent-administered language interventions, parents are trained by speech-language pathologists to become the primary intervention agents, learning how to facilitate their children’s language development in daily, naturalistic contexts. (This differs from parent involvement, in which children receive direct attention from the speech-language pathologist and parents play a secondary but supportive role.) Parent-administered interventions have yielded short-term developmental progress in communication and language skills in a wide range of preschool-aged children with delayed or disordered language. However, little is known about the long-term effects of this cost-effective intervention model.

High-intensity training is an intervention strategy that aims to increase the attention of children diagnosed with specific language impairment. Considering that attention deficit is associated with language impairment in young children, and especially boys, high-intensity training involving the parents and the child should be encouraged. Based on recent studies, this intervention has been found to improve both children’s language proficiency and attention skills.

Social-policy initiatives should focus on early identification with a speech pathologist, comprehensive assessments and providing highly responsive environments early on. As well, appropriate training and continuing education should be provided to everyone who works with children and their families, such as speech-language pathologists, early interventionists, early childhood educators and child-care providers. Yet there are still several barriers to overcome. These include developing more sensitive screening measures to identify the various kinds of impairments, achieving consensus on case definition, and enhancing parent recognition of children’s potential problems and the need to seek help. 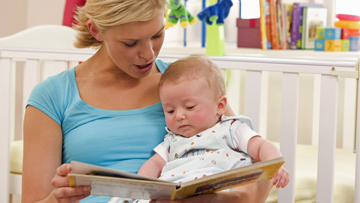 How frequent are language problems in the early years?

Talking is an important milestone in children’s development.

Most children will know how to say 100 words by the age of 21 months and will start to combine these words into short sentences before they are 2 years old. Unfortunately many young children fall behind these milestones.

Children who have limited expressive vocabulary (less than 40-50 words) at 24 months and make no word combination are identified as “late talkers.” About 8-12% percent of North American preschool children and 12% of children beginning school have language delay. Of these, 25-90% are diagnosed with a reading disorder – a problem that goes on to affect 10-18% of all school-age children.

The frequency of language problems and its impact on literacy and reading later in life speaks to the need for early intervention as soon as speech problems are detected.

Language Development at an Early Age: Learning Mechanisms and Outcomes from Birth to Five Years

Read, Speak, Sing: Fun ideas for you and your baby

Read, speak, sing to your baby: How parents can promote literacy from birth