Basic number concepts and skills (numeracy) generally emerge before school entry. It is important to promote the development of these competencies in young children and to know the best learning methods, as these skills are often predictive of children’s future school achievement.

Numeracy: it adds up to more than counting

Numeracy is sometimes defined as understanding how numbers represent specific magnitudes.  This understanding is reflected in a variety of skills and knowledge  (ex. counting, distinguishing between sets of unequal quantities, operations such as addition and subtraction), and so numeracy often is used to refer to a wide range of number-related concepts and skills. These abilities often emerge in some form well before school entry. The idea of exposing young children to Early Childhood Mathematical Education (ECME) has been around for more than a century, but current discussions revolve around the goals of early training in numeracy and the methods by which these goals should be achieved. Early mathematical learning can and should be integrated in children’s everyday activities through encounters with patterns, quantity, and space. Giving children ample and developmentally appropriate opportunities to practice their skills in mathematics, can strengthen the link between children’s early abilities in mathematics and the acquisition of mathematical knowledge in school. Unfortunately, children do not all have an equal chance to exercise these skills, hence the importance of ECME. Research on numeracy and early mathematical skills is important to formulate the program and objectives of ECME.

Difficulties in mathematics are relatively common among school-age children. Approximately 1 in 10 children will be diagnosed with a learning disorder related to mathematics during their education. One of the most severe forms is developmental dyscalculia, which refers to an inability to count and tally collections of items and to distinguish numbers from one another.

Basic mathematical knowledge emerges in infancy. At 6 months of age, infants are able to perceive the difference between small sets of elements varying in quantity (2 vs. 3-object sets), and can even distinguish between larger quantities, provided that the ratio between two sets is large enough (ex. 16 vs. 32, but not 8 vs. 12). These preverbal representations become more refined over time, and they form the early, though not sufficient, building blocks of future mathematical learning.

One achievement in numeracy is the acquisition of fact fluency. Fact fluency refers to the knowledge necessary to produce sums and differences in a flexible, timely and accurate manner. In the toddler years, children progressively acquire the requirements for fact fluency, often beginning with intuitive numbers (ex. know the meaning of one, two, three), leading to the ability to recognize that, for example, any set of three elements has a larger count than a set of two elements.

As they get older, children develop more advanced number skills. By age 3, they begin to be proficient in some nonverbal, object-based tasks, such as understanding the process of adding and subtracting, and  judging one set as having a larger quantity than a second one. Although preschoolers can match collections of 2, 3, and 4 elements if the objects are of similar size or shape, they still struggle when the objects are highly dissimilar (ex. matching two animal figurines with two black dots). Preschool children are also likely to get easily distracted by superficial features of a set (ex. judging a set of items as having a larger quantity than another equal set because the items are disposed in a longer row). Research is currently under way to determine how knowledge about quantities in infancy is related to preschool numerical competencies and later school achievement.

Although most children can naturally discover mathematical concepts, environment and cultural experiences play a role in advancing children’s knowledge about numbers. For instance, language acquisition allows children to solve verbal problems and develop a number sense (ex., understanding cardinality, the total number of elements in a set).  Children who lack early experiences with numbers tend to lag behind their peers. For instance, children from economically disadvantaged families tend to display poor numeracy skills early on, and these deficiencies later translate to mathematical difficulties in school. Performance on numerical problems and the kinds of cognitive strategies children use are likely to vary considerably across children. Even the range of one child’s responses from one trial to the next can be substantial.

Promoting early competencies in numeracy is important because of its relation to children’s mathematical readiness at school entry and beyond. Preschool children who have acquired the ability to count, name numbers, and make distinctions between different quantities tend to perform well on numerical tasks in kindergarten. In addition, children’s good numerical abilities predict later school achievement more strongly than their reading, concentration, and socioemotional skills.

Given children’s natural dispositions to learn about numbers, they should be encouraged to freely explore and practice their abilities in a range of unstructured activities. These learning experiences should be enjoyable and developmentally appropriate so that children stay engaged in the activity and do not get discouraged. Playing board games and other activities involving experiments with numbers can help children develop their numeracy skills. Materials such as blocks, puzzles, and shapes can also encourage the development of numeracy.

Parents can foster their child’s numerical knowledge by creating meaningful experiences with numbers paired with appropriate feedback (ex. asking the child how many feet she has, and using her response to explain why she needs two, and not one shoe). Parents and teachers should also create spontaneous educational moments that encourage the child to think and talk about numbers. Numbers can be introduced in several domains, including play (dice-throwing games), art (drawing a number of stars), and music (keeping a tempo of 2 or 3 beats).

Taking on children’s perspective and understanding that their interpretations of mathematical problems are different than adults’ are important components of effective education. Teachers need to know that numeracy follows a developmental process, and numerical activities must therefore be designed accordingly. To optimize interventions aimed at numeracy, kindergarten screening should ensure that children can recognize the quantity of small sets of objects (2 and 3) and make the distinction between these and larger sets (4 or 5 objects).

Early interventions in mathematics have important implications for school readiness. A successful ECME program includes a stimulating environment containing objects and toys that encourage mathematical reasoning (ex., table blocks and puzzles), play opportunities where children can develop and expand their natural mathematical abilities on their own, and teachable moments where preschool teachers ask questions about children’s mathematical discoveries. 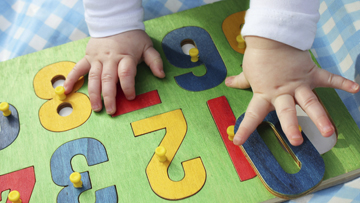 Numerical skills emerge during infancy and the preschool years when children are exposed to different quantitative and spatial relations in everyday activities.

Many school-age children struggle to learn math concepts and skills. Understanding the early development of numeracy can provide early childhood educators and elementary school teachers with the tools they need to nurture mathematical thinking.

Early Numeracy: The Transition from Infancy to Early Childhood

Learning Trajectories in Early Mathematics – Sequences of Acquisition and Teaching