Prosocial behaviour has its roots in infancy and early childhood. To fully capture its importance it is essential to understand how it develops across ages, the factors that contribute to individual differences, its moral and value bases, the clinical aspects of low and excessive prosocial behaviour, and its relevance for schooling.

Prosocial behaviour: Helping your child to give back

Why is it important?

Prosocial behaviours refer to voluntary actions specifically intended to benefit or improve the well-being of another individual or group of individuals. Examples of such behaviours include helping, sharing, consoling, comforting, cooperating, and protecting someone from any potential harm. From an evolutionary perspective, prosocial behaviours may have evolved from a biological adaptation to living in society. The development of prosocial behaviours is important during the early years as these actions are associated with social and emotional competence throughout childhood (e.g., peer acceptance, empathy, self-confidence, and emotion-regulation skills). Furthermore, prosocial behaviours are associated with academic performance, and the development of cognitive competencies, such as problem-solving and moral reasoning, all of which are contributing to a positive school adjustment.

Manifestations of prosocial behaviours emerge at a young age, and the same basic forms are found across cultures. Even 18-month-old infants demonstrate early forms of prosocial behaviours (e.g., when they point an out-of-reach object or an unseen event to an adult). Around the ages of 3 and 4, children’s prosocial behaviours increase in complexity. They respond more readily to others’ negative emotional state with appropriate sharing, helping, and/or comforting. During this developmental period, children also start to demonstrate in-group favouritism, which is manifested by a tendency to exhibit more prosocial behaviours towards individuals who belong to the same group (e.g., based on perceived similarity, such as race and gender) than members of the out-group. Yet, as children develop more advanced socio-cognitive skills and spend more time interacting with their peers, they become increasingly aware of the reasons why it is important to help others, which in turn motivate them to engage in prosocial behaviours.

Several factors predict and/or reinforce prosocial behaviours in young children, in addition to genetic differences that account in part for individual differences. Early moral development during the first five years of life is an important foundation for prosocial behaviours. For instance, children who experience guilt following transgressions are more likely to engage in prosocial behaviours relative to those who do not, as they are increasingly aware of the consequences of their actions for the self and for others. Children’s prosocial behaviours are also influenced by feelings of empathy and the desire to help others. While there is a general consensus that empathy is an important predictor of children’s prosocial behaviours, extremes forms of empathy - either surfeits or deficits - may increase the risk of developing psychological problems later on. For example, young children who express extreme concerns for their parents’ well-being (e.g., due to marital conflicts or health problems) have been found to be at increased risk of developing anxiety or depression as they grow up. In contrast, young children’s absence of reaction and/or inappropriate reactions to someone’s distress (laughter, enjoyment) may be a precursor of behavioural difficulties. However, it is important to keep in mind that the expression of empathy falls on a continuum and is influenced not only by the child’s characteristics but also by the environment he/she is exposed to. Finally, parent and peer socialization play an important role in the development of prosocial behaviours. Parents who model prosocial behaviours and encourage children to understand the perspective of others promote the internalization of prosocial values in their children. Similarly, educators who promote collaborative peer interactions motivate the development of cognitive skills that support prosocial forms of behaviour.

Prosocial education needs to start early at home and extend throughout the preschool years. Parents who model prosocial behaviours, exhibit warm and responsive parenting, and emphasize emotional states of others can help the development of prosocial behaviours in children. Parents are also encouraged to explain to children what they did wrong following a transgression, and how their actions may have affected the other person-–as opposed to simply punishing them. Early childhood educators can also play an important role in the development of children’s morality and prosocial behaviours by implementing instructional and intervention programs. Although more research is needed to establish a set of practical guidelines and practices that foster prosocial behaviours in young children, early interventions should emphasize:

Early childhood educators can also play an active role by curbing children’s predisposed biases and by structuring collaborative interactions with peers from diverse groups (e.g., gender, cultures, religions, socio-economic backgrounds). These opportunities would have consequences on children’s beliefs about others (e.g., us versus them), and prosocial behaviours across groups. Lastly, and most importantly, parents and educators are encouraged to positively reinforce children’s prosocial tendencies, rather than to negatively reinforce their antisocial tendencies (by punishing them, for example). By putting a greater emphasis on their good actions rather than on their bad ones, children’s prosocial behaviours are more likely to be manifested. 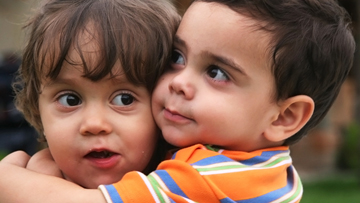 How can parents, teachers and peers facilitate moral and prosocial tendencies?

Educators and teachers can:

When it comes to learning and enhancing prosocial skills with peers and friends, it takes place during play, friendships and peer group interactions and while cooperating and collaborating during more formal learning activities.

The Moral Foundations of Prosocial Behaviour

The Motivational Foundations of Prosocial Behavior From A Developmental Perspective–Evolutionary Roots and Key Psychological Mechanisms: Introduction to the Special Section