This topic aims to provide a better understanding of the brain in early childhood: its development, structures and maturation, and the major role it plays in all spheres of the young child’s life — including emotions, learning and behaviour.

Your child’s brain (Stimulation): showing you care is smart

The brain is the most important organ of the human being. It is a very complex organ which has a preponderant role in all the functions of the body. Moreover, the absence of brain activity defines clinical death. Brain maturation, which is significant before birth – with the generation of over 100 billion nerve cells – and during the first two years of life with a continuing growing brain volume, is a period of great vulnerability. The developing brain is particularly sensitive to environmental influences, such as toxic early life stress. Brain development may be affected through sensing pathways by sound, touch, vision, smell, food, thoughts, drugs, injury, disease and other factors.

In the developing course, brain areas do not mature at the same time. For example, auditory perception begins before birth. The newborn brain is already able to recognize familiar voices and tunes from the foetal period. On the contrary, the cerebral areas implicated in declarative memory and in vision are not mature at birth. To become fully developed, these systems, including the auditory cortex, need the stimulation that occurs after birth.

An important aspect of the very young brain is its capacity for change. When maturing, the brain becomes less plastic; for example, by the end of the first year, the parts of the brain that differentiate sounds are becoming specialized according to the language the baby has heard. At the same time, the brain is already starting to lose the ability to recognize different sounds found in other languages.

Since the advent of imaging techniques which allow us to see structural images of the brain (magnetic resonance imaging [MRI]), to measure brain activity (functional MRI [fMRI]) in living people and more recently to detect changes in white matter microstructure (diffusion tensor imaging [DTI]), numerous studies have been conducted to explore cerebral anatomical changes and to try to relate them to behavioural changes. Because they are non-invasive, these techniques can be used to study the development and the effects of experience on the brain.

Recent evidence in young children indicates that total brain volume increases 101% in the first year, followed by a 15% increase in the second year. In the first year, the major growth is that of grey matter (149%), white matter increase is less important (11%). The cerebellar volume increases 240% in the first year, whereas increase by 90%. From ages 3 to 30, white matter volumes increase, while grey matter volumes rise and then fall, peaking at a characteristic time specific for each brain region during childhood and adolescence. Concurrently, connectivity between brain areas increases both structurally and functionally and the balance between limbic/subcortical and frontal lobe functions changes until young adulthood. Moreover, studies using genomic imaging indicate that genes are involved in shaping the brain. Twin studies carried out in adults as well as in children and adolescents show the high heritability of volume measured in different regions of the grey matter.

Early life stress may also affect the brain volume. Animal models have shown that the amygdala, the prefrontal cortex and the hippocampus undergo stress-induced structural remodelling, which alters behavioural and physiological responses, including anxiety, aggression, mental flexibility, memory and other cognitive processes. Research in humans increasingly suggests that severe early life stressors (e.g., trauma, maltreatment, neglect) may result in decreased brain volumes. However, numerous scientific studies support the conclusion that providing supportive, responsive relationships as early in life as possible can prevent or reverse the damaging effects of toxic stress.

Recording the electrical activity of the brain is a less recent method than imaging techniques; however it allows researchers to obtain event-related potentials (ERPs) which are electrical potentials in the brain in response to specific stimuli. Attention ERPs studies conducted in infants reveal a Negative central (Nc) component which is greater in amplitude when heart rate indicates attention.

In the early months of life, the visual system is still developing. At birth, the infant vision is mainly controlled at a subcortical level, with the cortex starting to mature at about 2 months postnatally. Due to immaturities of the eye components, the newborn is moderately farsighted. Visual attention and visual searching begin by 3 months; the infant begins to associate visual stimuli with an event (e.g., the bottle and feeding). Using variants of the simple visual orienting task known as the Gap task, studies indicate that the disengage operation becomes operative between 3 and 4 months of age. Prior to age 4 months, infants are able to selectively focus their attention, but once engaged on a particular stimulus, they have difficulty disengaging and moving their attention elsewhere. Rather, they tend to fixate for prolonged periods.

Auditory cortex shows a very prolonged developmental trajectory, with completely mature responses to simple sounds not achieved until about 18 years of age. At the same time, the brain’s responses to occasional changes in a repeating auditory stimulus can be measured in 2-month old infants.

Dramatic changes in the brain areas implicated in memory occur in the first two years of life. To assess declarative memory (“remembering”) in preverbal children, researchers have used elicited imitation (infants are shown an action (i.e., ringing a bell) and given opportunities to imitate the modelled action). Improvements in memory with age are consistent with brain development.

Once the infant born without any problem neither during pregnancy nor at birth, his/her developing brain is shaped by interactive influences of genes and experience. The brain architecture will form as expected if the parents and caregivers respond attentively to the interaction initiated by their child. Nurturing relationships in the early years promote physical and mental health and benefit for learning throughout the life cycle. Not only is supportive, attentive and sensitive care from adults required for an optimal infant’s brain development, it also protects the developing brain from potentially harmful effects of stressors. Moreover, if an infant’s brain has already been affected by toxic stress, scientific evidence shows that supportive and responsive relationships as early in life as possible can prevent but also reverse the damaging effects of toxic stress.

Work investigating the impact of experience on brain maturation during development and vice versa is still scarce. Adolescent neurobiology has also been relatively understudied. Therefore, the full complexity of the issue cannot yet be understood. The hypothesis telling that developmental changes in brain structure are prerequisites of a particular cognitive ability could be obsolete as the role of experience in shaping the brain could be stronger than previously thought. The image data add up with genetic information, behavioural scores, family history, blood tests, and much more. This flood of data is more than researchers can currently understand, and new bioinformatics and statistical methodologies are required to better grasp what information is most relevant to patient care.

Research on early life stress needs more studies to elucidate the effect of childhood stress on brain structures and processes. The field also lacks an adequate understanding of the genetic variations among children that moderate the reactivity, regulation, and impact of stress responses. Future research should analyse the impact of different types of trauma at different developmental stages, in order to identify sources of outcome variability. Furthermore, the use of salivary cortisol measure (a non-invasive measure of the effect of chronic stress) has boosted research on the neuroendocrine system involved in stress response, namely the hypothalamic-pituitary-adrenocortical (HPA) axis (or stress hormone axis).

To determine which brain areas are the likely cause of Event Related Potentials measured on the scalp, researchers can now use age-appropriate MRI templates which are allowing them to move from using adult templates to interpret infant data. New research can focus on specifics such as individual variability and neurodivergent populations.

Problems with visual disengagement, often expressed in infants as prolonged visual fixation, together with high levels of distress, are very worrisome and challenging for parents. They should be detected early and seen as flags that warrant referral.

Visual experience is crucial for a child's vision to develop normally – a “use it or lose it” situation; treatment of common childhood eye diseases should begin much earlier than standard practice dictates.

Brain’s response to a sound event (the auditory event-related potential) could be used in infants as a diagnostic indicator of early abnormal central auditory development; these are a method of choice for examining early auditory development and the maturation of auditory cortex. Passive learning, for example learning from tapes or from speaking toys, is one of the interventions that is suggested to remediate to problems in speech perception and language acquisition.

Although a lot of recent progress has been made, learning about memory and brain development in infancy will require more studies conducted in humans because much information comes from animal models (rodents and nonhuman primates).

As we increase our understanding of the relations between brain and behaviour, we will be able to develop interventions to help infants and children in the at-risk groups (e.g., infants born to mothers with blood sugar control problems during pregnancy, infants adopted from international orphanages and healthy preterm infants). 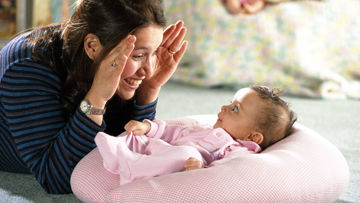 How can we support optimal brain development in infants?

Children’s brains mature significantly before birth to age 2, however it’s also a period of great vulnerability.

The brain is shaped by genes and experiences, and how they interact with each other. It is particularly sensitive to environmental influences, such as toxic early life stress. It may also be affected through sensing pathways by sound, touch, vision, smell, food, thoughts, drugs, injury, disease and other factors.

Parents can support their children’s brain development by:

Responsive relationships early in life can prevent – even reverse – the damaging effects of toxic stress on early brain development.

Interactions Between Brain Maturation and Experience in Driving Behavioural Development