Divorce and separation have direct impact on children’s development. In addition to understanding how they can influence behaviour, this topic aims to provide a better understanding of the possible effects according to the child’s age and how to lessen these effects through various interventions.

Divorce and separation: paying attention to your child’s needs

The rise in divorce has followed an international trend in the last few decades. From 1960 to 1980 alone, the divorce rate in industrialized nations has more than doubled. An increasing number of children from cohabiting, non-married couples are also likely to experience parental separation. These sociodemographic changes affect millions of children.

The effects of divorce and separation may be particularly important for children under 4 as rapid developmental changes in the cognitive, emotional, and social domains take place in early childhood. Thus, disruptions in this period can have lasting consequences on the child’s well-being and adjustment in later years. It is estimated that eradicating the detrimental impact of divorce on children could lead to a 30% reduction in rates of mental health difficulties in young adults, a 30% decline in teenage pregnancies, and a 23% cutback in school dropouts.

Children’s experiences of separation and divorce

Divorce and separation often lead children to experience intense emotions. Misinterpretations about the divorce and loyalty conflicts are also experienced by many, although few discuss their thoughts and feelings with their parents. Children who experience divorce may have more difficulties than children from two-parent families. Indeed, in the short term, divorce has been associated with decline in academic achievement, self-concept, and overall adjustment problems. Although most children from divorced parents do not suffer any long-term consequences, some children may experience difficulties in adolescence, such as mental health problems, substance abuse, delinquency, and teenage pregnancy. Problems may even persist into adulthood, as they tend to have more economic, emotional, health, and relationship problems.

The age at which children experience the divorce should be a primary concern to address their needs adequately. In the early years, infants function best with parents who are reliable, responsive and sensitive to the infant’s personal traits. Given that their sense of time and memory is not yet mature, babies must spend time frequently with both parents so that strong attachment relationships can develop. As children get older, the amount of time they spent with each parent becomes less crucial, though each parent must continue to be actively involved in their child’s education, discipline, play and care.

The effects of overnight stays with the nonresidential parents also fluctuate depending on the age of the child. Compared to infants with very few overnights, children under 2 who have regular overnights showed difficulties in stress regulation, while two- and three-year-olds also exhibit more separation anxiety, aggression, and eating problems than toddlers with less overnights. In the preschool years, children with overnight stays share a more positive relationship with the second parent and are better adjusted than children without overnights.

Risk and protective factors involved in the consequences of divorce

Several risk factors, most involving the quality of parenting, can worsen the negative impact of divorce on child development. The early stages of divorce represent a stressful period for parents, which often impairs parenting.  Parents are typically less patient, consistent, and warm with their children during that period. Child monitoring, positive exchange and gentle discipline are also likely to diminish. Other factors that have been found to exacerbate the adverse effects of divorce include poverty, disorganized home arrangements, lack of contact with the nonresidential parent, and parents suffering from mental health problems. In addition, exposure to high parental conflicts is likely to affect children of all ages, but is particularly damaging to children under 4.

Fortunately, the harmful effects of divorce can be attenuated by a number of protective factors. For instance, children of cooperative and authoritative parents who minimize their child’s exposure and involvement in conflicts and who provide a stable and organized home environment are much better equipped to cope with the separation. Close ties with siblings and members of the extended family also lead to better adjustment.

Given that many of the adverse effects of divorce can be explained by parenting, parents can play a central role in facilitating the child’s adjustment to the new family arrangements by:

Recommendations also extend to the elaboration of optimal and flexible parenting plans that support children’s needs at all ages, and allows children access to both parents. These tend to be more successful when they are elaborated in mediation than in court, and include agreement on time spent with each parent. From birth to the toddler years, careful separations of short duration are appropriate but overnight stays are not recommended unless the infant has already developed a strong attachment security to the nonresidential parent. In the preschool years, children can be separated from the first parent for longer periods of time.

Several programs exist to help children and parents cope with divorce and separation, including child-focused interventions that emphasize on stress management, expression of feelings and interpersonal resources; and parent-focused programs that discuss relationship quality, discipline, emotion regulation, and coparenting. Given the success of these programs, brief, community-based interventions must now be put in place on a large scale to increase access for parents and children. Alternatives to formal court proceedings such as mediation should also be readily available to all parents. 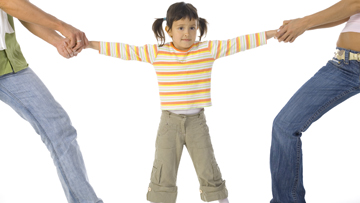 How to minimize the impact of divorce and separation on children?

Children are affected by divorce and separation in many ways. In the short term, they may experience intense emotions and feel conflicted loyalties. Children under 4 are especially sensitive as this is a period when many rapid changes are taking place cognitively, emotionally and socially.

Parents need first and foremost to pay attention to their children’s needs:

Most children don’t suffer long-term consequences, but the possible impacts of divorce and separation for some (e.g., mental health, substance abuse, delinquency and teenage pregnancy) speak to the need for better supports for parents and interventions for children affected.

Consequences of Separation/Divorce for Children

How Parents Can Help Children Cope With Separation/Divorce

Interventions to Help Parents and Children Through Separation and Divorce