Physical activity and young children: a fun and healthy habit

Child obesity is a growing problem in many nations. In 2005, the number of overweight children under the age of 5 was approximately 20 million. Despite common beliefs that children are naturally active, rates of physical activity are low in several countries. In fact, behaviours associated with a sedentary lifestyle are often common place in the daily routine of young children. Sedentary behaviours, such as television viewing and playing computer games, typically require little energy expenditure. These behaviours are not necessarily in opposition to physical activity because a child who engages in physical activity can also spend a significant amount of time in sedentary behaviours. However, given that sedentary living might have long-term negative health consequences and that physical activity is beneficial to children’s health and development, it is important to find ways to encourage children to develop a healthy lifestyle from an early age.

Sedentary activities are often introduced early on in the infant’s daily routine, and have a tendency to increase steadily from infancy to the preschool years, whereas rates of physical activity tend to be low both at home and in the childcare setting. Guidelines released in Canada and Australia, as well as those by the World Health Organization, which form part of 24-Hour Movement Guidelines, combine physical activity recommendations for the early years with recommendations for sleep and sedentary behaviour. These guidelines differ by developmental stage.

Several factors are related to physical activity. Boys and girls who have active parents and who spend a lot of time outdoors are typically the most physically active. Predictors of physical activity vary depending on both the child’s characteristics (e.g., age) and the settings/contexts (e.g., home vs. childcare). For example, in preschool, kindergarten and childcare settings, children are most active 1) when they play in an unconstrained environment 2) when the duration of recess is shorter, and 3) when the staff is trained to engage children in physical activity. Providing children with play equipment that are both fixed and portable and with opportunities to engage in physical activity also increase their engagement.

The health benefits of physical activity on child development extends much beyond physical health as it also impacts the domains of motor skills, psychological well-being, social competence and emotional maturity. In contrast, sedentary behaviours are considered to pose a threat to young children’s cognitive development. Preschool children who spend too much time in front of screens are likely to experience cognitive difficulties in the school years, including attention deficits, poor language skills, low school achievement, and a short memory span (i.e., a list of items a person can retain). Specific psychosocial behaviours are also heightened as result of too much screen time. These include aggression, bullying, aggression towards siblings, peer problems, anxiety or depressive symptoms.

The total amount of time spent in front of screens also impacts young children indirectly by displacing time spent in physical activity and sleep, and by displacing more beneficial forms of sedentary behaviour (such as reading/interactions with family members). The timing of screen time also matters - for example screen time in the hour or so prior to bedtime is harmful to sleep in early childhood.

To encourage children to develop an active lifestyle, different organizations advise limiting the amount of time children spend in sedentary behaviours, and promoting physical activity in the family and in the childcare setting. For example, American and Australian organizations recommend that children under 2 not watch television, and that those between 2 and 5 be limited to 1 to 2 hours per day. The new guidelines (24-Hour Movement Guidelines) specify the intensity of physical activity (i.e., whether the activity is light, moderate or vigorous) for preschool aged children. Sixty minutes of moderate- to vigorous-intensity, also termed energetic play, is now recommended as part as the total 180 minutes per day. Additionally, the most recent guidelines recommend a time for tummy time for infants (i.e., 30 minutes per day, accumulated throughout the day).

Parents can encourage their child’s participation in physical activity by being role models who provide every opportunity for the child to be active, such as going for short walks instead of stroller rides, and who limit time spent in sedentary behaviours (e.g., time spent in front of screens). Parents are also responsible for providing safe and risk-free environments both indoors and outdoors where their child can be physically active. Parents should make sure to give equal opportunities to both sons and daughters to be physically active. To enhance physical activity at home, policy makers should make parental education and support a priority. As well, greater emphasis on the right to play may drive policy changes which improve levels of the 24-hour movement behaviours in early childhood. In the childcare setting, physical activity can be enhanced by integrating physical exercises of varying intensity both indoors and outdoors in children’s daily routine, and by making these activities more enjoyable. As well, providing multiple short periods of free-play is a way to build on the natural tendency for children to be active at the start of free-play sessions. Children should be provided with a proper size outdoor space including shaded areas and portable equipment. Training childcare professionals in integrating physical activity within the curriculum has also been found to be a winning strategy to promote children’s engagement. 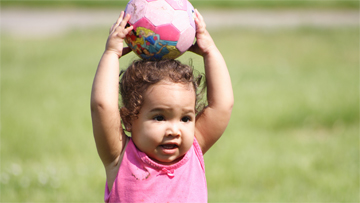 How can we get children to move and be active?

Sedentary activities (e.g., watching television) often become part of a child’s daily routine early in life and increase through to the preschool years. To help children be more active:

Physical activity makes a difference in children’s physical health and overall development. Encouraging children to develop an active lifestyle should be a priority shared by all.