To distinguish between restlessness and Attention-Deficit/Hyperactivity Disorder (ADHD), we need to understand the origins of ADHD, its development, the myths and prejudices around it, how to recognize it, and the most effective intervention strategies.

Attention-Deficit/Hyperactivity disorder (ADHD) is a neuropsychiatric disorder defined by developmentally atypical, persistent and impairing restlessness, impulsiveness and inattentiveness starting from an early age. ADHD can be broken down into three subtypes based on the type of behaviours that are most prominent: 1) the inattentive type; 2) the hyperactive-impulsive type; and 3) the combined type depending on the nature of the symptoms. The disorder is diagnosed when the child’s symptoms are present and impairing in more than one context such as in school, at home or outside of the home. ADHD is estimated to affect 3 to 7% of school-age children worldwide, and boys show higher rates of ADHD than girls. ADHD tends to co-occur with other psychiatric or developmental disorders (e.g., anxiety, mood disorder, learning or language disabilities, conduct disorder and sleep difficulties) in 50 to 66% of cases. ADHD persists into adulthood in more than half of affected individuals. ADHD symptoms and its concurrent disorders interfere with academic and behavioural functioning at school and so children have lower rates of high school completion. They are also more likely to experience employment difficulties as they grow older. Other negative consequences relating to ADHD include difficult interpersonal relationships and higher prevalence of accidental injuries, driving accidents and teen pregnancy. In sum, ADHD represents an important public health concern and may engender high personal and societal costs.

ADHD is believed to be caused by an interaction of genetic and environmental factors. Symptoms of ADHD are highly heritable (76%), yet the nature of the genetic influence is still unknown. Results from published studies indicate that ADHD shares genetic influences with other conditions so, for example, one finds shared genetic influences between inattentive symptoms and dyslexia, hyperactive-impulsive symptoms and oppositional problems, and ADHD with symptoms of autism. Furthermore, genes responsible for cell division, cell adhesion, and neuronal migration are thought to be related to the onset of ADHD. Among environmental risk factors, researchers have noted the negative influence of prenatal maternal smoking and drinking, maternal depression, low birth weight, poor parenting practices, and living in a disadvantaged neighbourhood.

Children with ADHD experience more academic problems than their schoolmates due to their neuro-cognitive impairments and behaviour. ADHD is often associated with deficits in executive functioning (e.g., planning, organizing, paying attention to important details, and inhibiting impulses). Accordingly, children identified with this disorder are more likely to exhibit learning and/or language disabilities. Results from studies examining the working of the brain suggest that ADHD is associated with atypical activity in the frontal cortex, the brain area responsible for cognitive processes. That said it is important to note that only a subgroup of school-aged children with ADHD (30%) has executive functioning weaknesses, suggesting it is neither necessary nor sufficient to cause the disorder.

ADHD is usually first identified and treated among school-age children. However, the presence of hyperactive-impulsive or inattentive symptoms during the preschool years is considered central to establishing the diagnosis. Direct observation of the child can suggest the diagnosis but even the most symptomatic child can be calm and attentive in an unusual setting such as in the doctor’s office. Consequently, assessment should focus on obtaining a history of the child’s behaviour at home, at play and in school from early childhood to the time of the assessment. A typical clinical interview allows an opportunity to discuss how parents and teachers have responded to the child’s difficulties and to identify strategies that have worked and those that have not. Assessment should not be limited to ADHD symptoms but should enquire about associated symptoms that might also be evident such as anxiety, mood or conduct problems. Parents are not always aware of how much stressful circumstances can upset their child; therefore, a direct interview with the child can be an important part of the assessment. Concurrent disorders are an important focus of treatment and their presence can alter the effectiveness of therapy.

Many clinicians find that parent and teacher rating scales are helpful in the diagnostic process as a way of obtaining a description of the child’s behaviour that can readily be compared to age norms. Some children with high levels of restlessness, inattentiveness and impulsiveness have medical problems or developmental delays that must be identified as part of the assessment. Children with learning difficulties may be symptomatic at school and during homework sessions because they are struggling with the academic material. Other children may be symptomatic at home only suggesting some parenting, social or environmental problem. It can be very difficult to identify which children have specific learning difficulties in the doctor’s office. Consequently, consultation with an educational psychologist can be very helpful in getting a complete picture of the child’s strengths and difficulties.

Stimulant medication (such as methylphenidate, RitalinTM) in various short and long acting preparations plays an important role in the treatment of ADHD. More recently, non-stimulant medications, such as Atomoxetine, have become available and play an important role in treatment. These medications can help a large number of affected individuals by improving their attentiveness, impulse control and reducing their activity level. Also effective are intensive behavioural interventions that involve a combination of self-control training for the child and education in parenting strategies for the parents. Positive parental attention, rewards for appropriate behaviours, and negative consequences for misbehaviours (e.g., prohibiting children from playing with their favourite toy) are recommended procedures in behavioural treatments. Teachers can also apply similar strategies within their classrooms. Available evidence indicates that the best interventions are a combination of medication, behavioural interventions and school-based programming for behaviour and learning. These treatments have to be intensive and long term to have their optimal impact. Direct training of cognitive functions such as working memory (that ability to hold and manipulate information in short-term memory) has shown promise as a potentially effective intervention. Some children may show improved behaviour upon removal of certain foods from their diet although the generality of this effect is not known and training of the brains electrical activities may improve alertness and behaviour in some children. That said a major issue with these treatments pertains to the generalization of improvements across settings. Future research examining factors that affect treatment outcomes (individual and contextual) should be conducted to improve children’s treatment gains over time and in different contexts.

How to help a hyperactive child?

ADHD can affect all parts of a person’s life. Children with ADHD who take part in early intervention programs tend to need less services in the school, justice and health systems later in life. The condition of children with ADHD can also be improved by combining medication to educational and other interventions. The use of medication may help to reduce the severity of symptoms and thus facilitate the implementation of an intervention.

Getting help in the early years can bring short- and long-term benefits to children as it can mitigate problems associated with ADHD, such as learning disabilities, anxiety, depression and behaviour problems. 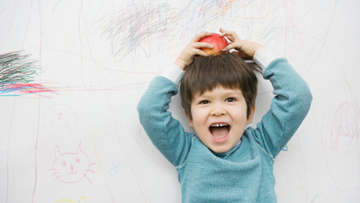 Many people argue that genuine ADHD appears during the pre-school years and that the related symptoms are objective, meaning that any observer would come to the same conclusion. This perspective is often, but not always true.

Although in preschool-age children, diagnosing the disorder is left to specialists, in their daily settings, parents are the experts when it comes to their child. If they perceive that their child is restless, inattentive or impulsive, that he has difficulty controlling his reactions, needs to move or has difficulty to wait his turn, then caregivers ought to listen carefully.

In ideal circumstances, the specialist will work with the parents to observe the child’s behaviour in various settings and also evaluate if the problem might lie elsewhere (e.g., in parental expectations, coping strategies, stress level or socio-economic situation).

In some cases, ADHD can also become symptomatic much later in development, after starting school or even later in the school-age period.

In all cases, the ultimate arbiter of the diagnosis is the presence of impairment, whether it be at the social, academic or emotional level.