Poverty considerably heightens family stress and increases the risk of social and emotional problems in children. Because poverty can be even more damaging during the early years, it is important to understand these living conditions and associated factors in order to mitigate the effects.

Nearly 12% of all Canadian children live below the low-income level, according to 2005 federal statistics. This represents 788,000 children.¹ Low income is particularly prevalent among single-parent families headed by a woman. According to 2005 figures, 33.4% of those in that category fall below the low-income cut-off. Researchers agree that poverty compounds the stresses that all families face and can have a negative effect on children’s development. The risks of negative child outcomes and the likelihood of poor living conditions are noticeably higher for children living in families with annual incomes below $30,000.²

Low family income has been consistently associated with low IQ and early school failure. It has also been linked to several childhood problems, including insecure attachment, negative mood and inattention, as well as other behavioural problems. A number of factors that are associated with poverty may exert a negative influence on a child’s social and emotional development: a lack of community support, single parenthood, low parental education, maternal depression, nutrition, low birth weight and infant health are just some of the variables. In fact, when researchers take into account these associated factors, low family income by itself appears to have little causal effect on early social and behavioural development.

Thus, although improving the economic status of families promotes more positive outcomes for children’s cognitive development and academic achievement, direct services and therapeutic interventions may be a comparatively more promising alternative for improving children’s psychosocial development and reducing behaviour problems. The key seems to be bringing in early intervention. Home visiting is one way in which a variety of services can be provided to low-income families. Evidence is emerging that the impact of high quality multidimensional home visiting programs lasts long after the intervention ends. Families set a different life trajectory, with fewer closely spaced children, less reliance on public assistance, and greater health and well-being among the children. Home visits, particularly in combination with centre-based care, have been successful in reducing children’s behaviour problems. Two notable centre-based programs that have shown long-term effects on children’s behaviour are Perry Preschool and Head Start. More research is still needed to determine what components of programs are essential and which produce the greatest long-term impact. Similarly, more research is needed to find out how programs work to produce their long-term impact, whether it is because of improved caregiving, increased maternal personal resources, improved family functioning, expanded economic resources, or all of the above.

Other services and policies that are likely to have positive effects on children’s environments and development include food supplementation programs for pregnant women and housing subsidy programs. Despite these promising research results, intervention services are not always readily available in practice. For instance, they are not as easily accessible in rural as in urban areas of Canada and, similarly, they are not as readily accessible in the northern regions as in the south of the country. Researchers say that improving the parents’ or caregivers’ understanding of children’s normal and problematic development, as well as improving their so-called service perception, or their beliefs and expectations about social services, is important to ensure that families who need services seek them. They also suggest reducing barriers to service accessibility by providing child care, assistance with transportation costs, varied program times and locations, low-cost or free programs, and efforts to accommodate literacy, language and cultural differences.

Researchers call for increased funding for interventions that would help low-income children whose development may be compromised by family or environmental risk factors. In addition, they call for increased evaluation of intervention services, especially as they are implemented in less than ideal real-world settings. Program evaluations should be theory-based, use rigorous methods, and include a focus on children’s emotional, social and behavioural outcomes. 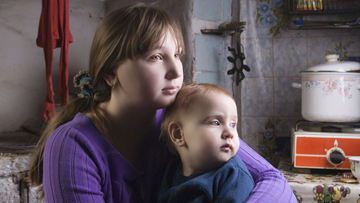 How can we help children in low income families?

Children who grow up in low income environments may be at greater risk of having psychosocial or behavioural problems.

Home visiting is one way to provide services to low-income families. When combined with centre-based child care, home visits have been effective in reducing children’s behaviour problems.

Food supplementation programs for pregnant women and housing subsidy programs are also likely to have positive effects on children’s environments and development.

An important first step is to ensure that families who need services seek them out. This means overcoming any negative perceptions they may have about social services and educating them on child development so that they know when to seek help.

Low Income and Its Impact on Psychosocial Child Development. Comments on Duncan and Magnuson, and Weitzman