This topic aims to provide a better understanding of the negative association of smoking to the mother’s and the child’s health, both during and after pregnancy, and to take stock of the intervention and prevention strategies that have proven successful with pregnant women.

Tobacco use during pregnancy: getting off to a good start with good information

Prenatal cigarette smoke exposure (PCSE) is the leading preventable cause of several negative birth outcomes, and affects 600,000 live births in North America every year. Although more and more women quit when they find out they are pregnant, 10 to 15% continue to smoke. It is estimated that of those who ceased to smoke during pregnancy, most will start again after giving birth. The incidence of smoking during pregnancy has been dropping in the last two decades but remains high particularly among adolescent and low-income women. Eradicating PCSE would allow health care systems to save millions of dollars in neonatal costs.

Smoking during pregnancy is linked to several negative health outcomes, including ectopic pregnancy, miscarriage, placenta previa and premature labor. Newborns with prenatal cigarette smoke exposure (PCSE) are at risk of having a low birthweight, chronic ischemia, hypoxia, and excessive tonicity and startle response. Perinatal mortality is also more likely among infants exposed to cigarette smoke. Medical problems continue to be associated with PCSE in infancy and childhood. For instance, the proportion of babies who are victims of Sudden Infant Death Syndrome (SIDS) is higher among those who were exposed to cigarette smoke in utero. Children who had PCSE are also at risk for infantile colic, ear infections and respiratory problems, including asthma, coughing, and wheezing.

The negative outcomes associated with PCSE extend to the behavioural and developmental realms. Babies who were prenatally exposed to cigarette smoke tend to be more irritable and inattentive, and less responsive to inanimate auditory stimuli (ex. a rattle). In early childhood, PSCE has been linked to excess weight, language delay, Attention Deficit Hyperactivity Disorder (ADHD), conduct problems and externalizing problems, such as acting out and aggression. The detrimental outcomes associated with PCSE sometimes persist in adolescence and adulthood. This has been observed for externalizing problems, criminal behaviours, substance abuse, conduct disorder, ADHD, excess weight and the thinning of the orbitofrontal cortex, a brain region linked to emotion-regulation and the reward system. Gender differences are to be taken into consideration when examining the negative consequences of PCSE. For instance, males who had PCSE seem to be particularly at risk for conduct disorder whereas for females substance abuse is the most frequent outcome.

The major problem with assuming that PCSE causes these detrimental outcomes is that there is a number of confounding factors that might account for the association. Given that it would be highly unethical to ask women to smoke or not to smoke during pregnancy, it is nearly impossible to remove the possibility that other variables might cause the negative outcomes associated with PCSE. Factors such as parental education, family income, stressful life events, parenting style, poor mother-child relationship, peer influence and genetic predispositions are all related to both PCSE and negative health and behavioural outcomes. For example, the link between PCSE and child behaviour problems had been explained by the mother’s own childhood background of conduct problems, arguably leading to both maternal smoking and child behaviour problems.

In addition, the nature of the association between PCSE and child outcomes is not always straightforward, and rather varies as a function of genetic background.

Creative approaches, such as quasi experimental research designs, have been taken to try to eliminate confounding factors and isolate the link between PCSE and negative outcomes. Animal research, twin studies, sibling-comparison design, in vitro fertilization cross-fostering design have all been used to account for genetic factors and eliminate potential environmental causes. Overall these studies show that:

Problems related to prenatal cigarette smoke exposure (PCSE) in children can be prevented by encouraging women of child-bearing age to quit smoking. Their multiple contacts with health-care systems and other service providers (ex. schools and daycares) should be taken as opportunities to expose them to smoking cessation support programs. Pregnant mothers in particular should know that, although quitting early in pregnancy is best, cessation or smoking reduction at any stage is beneficial to the growing fetus. Those who are reluctant should be given a brief intervention to increase their motivation to quit. Nicotine replacement therapies should be used only when the pregnant woman is unable to quit. In these cases, doses should be kept low and be administered intermittently (gum) rather than constantly (patch).

Extensive psychosocial interventions that go beyond a physician’s advice to quit have been used to increase cessation rates. Interventions that include multiple components, such as the "5-A" approach (Ask, Advise, Assess, Assist and Arrange), have been applied successfully to help pregnant mothers quit smoking.

To maximize the likelihood of quitting, it is also useful to identify and target psychosocial obstacles faced by some women. For instance, depressed women who smoke are more likely to have low income, live through stressful circumstances and live with partners who smoke. These factors make it even more difficult for women to quit and should be addressed to increase cessation rates. For instance, quitting can be encouraged by providing the help needed to treat depression. In addition, financial obstacles can be overcome by ensuring that smoking cessation treatments are covered by health insurance. Providing both mothers and their partners with treatment cannot only help decrease direct PCSE, but can also reduce exposure to second-hand smoke.

The public health sector has an important role to play in reducing the occurrence of the psychosocial problems associated with PCSE. Both prevention and intervention strategies need to be developed to address this issue. Since many women who quit smoking for pregnancy resume smoking within one year postnatally, stronger connections between prenatal and pediatric care services can also help maintain smoking abstinence in the long term. Finally, children’s health can also be improved by expanding and reinforcing policies on smoke-free environments. 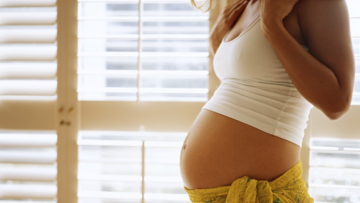 How big a problem is cigarette smoke exposure to an unborn child?

Each year, 600,000 children in North America are exposed to cigarette smoke before birth.

The harmful effects of this include a higher risk of miscarriage, premature birth, sudden infant death syndrome, low birth weight and height, respiratory problems and obesity, as well as an association to behavioural problems (e.g. oppositionality, conduct problems and impulsivity) although whether this is a causal association remains uncertain.

While many women quit smoking when they find out they are expecting, about 10-15% do not. Many of these include teenage mothers and mothers living in low-income households. Even when mothers do quit smoking during pregnancy, many resume smoking after their child is born, leading to future health problems for both.

It’s clear that more education and smoking cessation programs are needed for new mothers who smoke, especially those most at risk.

How many children smoke and drink before they are born?

Stress and pregnancy (prenatal and perinatal)