The American Head Start preschool program and related projects use an integrated approach that combines educational, social and health services for preschool children and their low-income families. The objective: to prepare these children for their entry into the school system.

Head Start is an American preschool program for disadvantaged children. Established in 1965, this federally funded program is now the largest educational provider in the United States for preschoolers living in poverty, with some 900,000 three- and four-year-olds enrolled in 2005-2006.

The initial goal of the program was to bring poor children up to the level of more advantaged children by the time they reached school entry. Because the designers of Head Start recognized that young children living in poverty need much more than preschool education to prepare for elementary school, the program takes a comprehensive approach, offering a mix of educational, social, nutritional and health services to three- to five-year-olds and their low-income families. More specifically, these services include early childhood education, medical screenings, nutritious meals and parent training.

A companion initiative called Early Head Start offers services to over 60,000 children under age three. This program was created in 1994.

Head Start is often viewed as a “laboratory” for developing effective interventions for children in poverty. Issues affecting this program therefore have broad implications for early childhood education policy in general.

Head Start children are selected among the most disadvantaged children in their communities and are also often referred to the program by other social agencies. Unfortunately, Head Start does not have enough money to serve all children who live in poverty. Currently, only 60% of eligible children participate in Head Start. Insufficient funding is one of the many challenges the program faces in meeting the goal of offering comprehensive services to children from low-income families. Another challenge is that, since families move in and out of poverty, it is difficult to target the pool of children eligible at any given time. Low teacher qualifications are also a problem. Finally, there is much debate over the optimal mix of services (educational vs. health and social, child-oriented vs. family-oriented, etc.).

There have been a number of studies on the impact of Head Start, but most studies suffer from methodological problems (usually with comparison groups), making their findings difficult to interpret. Nevertheless, evidence supports the general conclusion that children attending the program enjoy modest benefits over both the short and long term.

In a study comparing Head Start participants with their non-participating siblings, long-term benefits reported were increased high school graduation and college attendance rates for white participants and reductions in criminal charges or convictions among African-American participants. In another recent but small-scale study, researchers observed positive health and cognitive outcomes for children, as well as benefits in terms of parents’ health and safety habits.

So far, the ongoing Head Start Impact Study combines the best experimental design with a nationally representative sample of nearly 5,000 children. It compares progress in cognitive, social-emotional, health and parenting domains in children randomly assigned to a Head Start group or a non-Head Start group. Initial results show very modest outcomes after one year of participation in Head Start. Specifically, positive effects were found for letter-word identification, pre-writing and vocabulary scores, and how often parents read to their children. No significant effects were found on oral comprehension or mathematics. The strongest impact was on parent reports of children’s literacy skills and receiving dental care.

Another study matched data on Head Start programs to child-level data from the National Longitudinal Survey of Youth (NLSY). It found that Head Start programs with higher per-capita spending and programs that spend more on child-oriented activities (such as education, health and nutrition) tend to have better child outcomes.

Several recent evaluations examine the effects of Early Head Start, which targets children from birth to age three. Short-term effects appear to be very positive, as participating children have significantly higher scores on several cognitive tests, exhibit less aggressive behaviour and less negative behaviour towards parents during play, and demonstrate better sustained attention to an object during play at age three. How well these gains are maintained over time still needs to be evaluated.

The modest outcomes associated with Head Start participation suggest that the program is not reaching its full potential. One possible explanation is that the educational services offered are too weak. In fact, less than one-third of Head Start teachers have a bachelor’s degree or higher.

One author recommends that every lead classroom teacher in Head Start should possess a B.A. in early childhood education, and that every assistant teacher should have either an AA degree or CDA (Child Development Associate) certification. The great difficulty in improving the growth trajectories of children mired in poverty needs to be recognized, and the program extended to two years (68% attend for only one year). However, as Head Start currently serves only 60% of eligible children and almost none of the near poor, it cannot be justified to systematically make the program longer.

As individual states are getting organized to develop and implement universal preschool education, the Head Start programs’ wealth of experience should be used to inform and guide these new initiatives. Its emphasis should shift to providing comprehensive services to children and their families and delivering mental health services to young children of all income levels with emotional or behavioural difficulties. As well, Early Head Start should be expanded, as it constitutes a preventive approach to insufficient school readiness.

In setting priorities and improving Head Start programs, a number of key questions remain: Does Head Start have a lasting positive impact on children, and in what areas? Are the benefits of sufficient value to offset program costs? Should Head Start programs be expanded to serve all children in poverty? Are benefits different for different sub-groups of the population? Do program effects fade out over time, and if so, why? Given the local variation of Head Start programs, what are the attributes of the more successful ones? What mix of service components is optimal, and what type of curriculum should be offered? As Head Start continues to evolve, research on the program will further contribute to our knowledge of how to make interventions for children in poverty more effective. 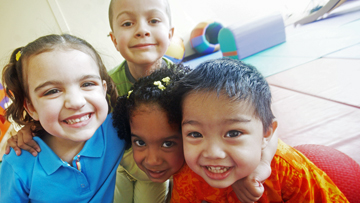 What is the impact of the Head Start program?

Head Start is a comprehensive American preschool program for disadvantaged children. It offers a mix of educational, social, nutritional and health services to three- to five-year-olds and their low-income families to bring poor children up to the level of more advantaged children by the time they reach school entry.

Policy makers need to consider these benefits in future decisions about the program and its funding.

Head Start Policy: Comments on Currie, and Hustedt and Barnett