Essential to psychosocial adjustment in early childhood and well beyond, children’s relations with their peers play a major role in their overall development. Promoting social and emotional competencies and intervening in cases of difficulty very early in life seems particularly effective for fostering positive experiences among children.

Peer relationships in early childhood are essential to concurrent and future psychosocial adjustment. Experienced through group activities or one-on-one friendships, they play an important role in children’s development, helping them to master new social skills and become acquainted with the social norms and processes involved in interpersonal relationships. This topic is of particular interest nowadays since a growing number of children are exposed to peers even before school age through daycare, and because most children interact with siblings who are about their age in the family context.

By age four at the latest, most children are able to have best friends and know which peers they like or dislike. However, between 5% and 10% of children experience chronic peer relationship difficulties, such as rejection and harassment. Early problems with peers can have a negative impact on the child’s later social and emotional development. Nevertheless, interventions targeting such difficulties seem to be especially effective when they are undertaken early in life.

There are a number of emotional, cognitive and behavioural skills developed in the first two years of life that help promote positive peer relations. These include managing joint attention, regulating emotions, inhibiting impulses, imitating another child’s actions, understanding cause-and-effect relationships, and developing language skills. Some external factors, such as children’s relationships with family members and their cultural or socioeconomic background, and individual factors, such as physical, intellectual, developmental or behavioural disabilities, may also influence young children’s peer experiences.

Children with disabilities, who are often impaired in several of the above-mentioned basic skills, tend to perform less well socially than their typically developing peers. In particular, children with very limited or no communication skills, limited social skills and/or limited motor skills tend to have inadequate (e.g. aggressive) behaviours, to interact less with peers, and as a result to be less well accepted by their peers.

Even in children who display no disabilities, one of the chief factors associated with peer relationship difficulties is behaviour. Children who are aggressive, hyperactive or withdrawn often face greater peer rejection.

The relationship between aggressive behaviour and the experience of peer rejection may vary according to gender, developmental period and peer group. For example, the aggression-rejection association is more marked in preschool or early school years than later in childhood. Aggressive children may also be more popular when they belong to a group of children who are supportive or neutral towards aggressive behaviours, and may not appear to have difficulties making friends among similarly aggressive friends.

Still, the absence of prosocial behaviour, rather than the presence of aggression, may promote peer rejection. Shy and withdrawn children also experience peer relationship difficulties, although these are more likely to occur later than the preschool years.

Over the short and medium term, problematic peer relations are associated with educational underachievement and low academic performance. Among other things, peer conflict and rejection can suppress children’s motivation for classroom activities. Children who have friends in the classroom and who are accepted by their peers are generally more motivated to participate.

Over the long term, early peer relationship difficulties are correlated with a variety of adjustment problems in adolescence and young adulthood, such as school dropout, delinquency and emotional problems, such as loneliness, depression and anxiety. Yet the evidence for long-term consequences of peer difficulties experienced in the preschool years is limited, as other potential causes (e.g. personal or environmental factors) have not been ruled out. However, risks of maladjustment in children with early behavioural and emotional problems appear to be exacerbated by peer rejection. Conversely, early friendships and positive relations with the peer group appear to protect at-risk children against later psychological problems.

Sibling relationships are a special kind of peer relationship, more intimate and likely to last longer than any other relationship in one’s lifetime. They provide an important context for the development of children’s understanding of others’ worlds, emotions, thoughts, intentions and beliefs. Frequent sibling conflicts during childhood are associated with poor adjustment later in life, including violent tendencies.

Two kinds of prevention programs designed to promote the social and emotional competencies of preschool children have shown positive impacts: universal programs, which are usually teacher-taught and directed toward the entire classroom to promote social learning and positive peer relations; and indicated programs, which focus on remediating skill deficits and reducing existing behavioural problems that may lead to peer difficulties in some children.

All preschoolers should be taught a range of skills that are associated with peer acceptance and that protect against peer rejection. In the preschool years, these include cooperative play skills, language and communication skills, emotional understanding and regulation, aggression control and social problem-solving skills. Universal programs have been designed to teach these skills, and it appears that preschool curricula that use skill presentation lessons (with modelling stories, puppets and pictures) and guided practice activities (role plays and games) to teach social-emotional skills in the classroom have positive impacts.

Key ingredients of effective indicated programs include coaching young children in cooperative play and communication skills, and providing generalization activities in the classroom context. These programs have proven to be effective for children with low peer acceptance or social-behavioural problems and developmental disabilities.

To promote positive peer experiences specifically in children with disabilities, inclusive programs taking place in a group of well-adapted children should be the educational placement of choice. In fact, disabled children often require systematic and individually planned interventions or teaching strategies to promote peer-related social competence, and a key feature that determines the success of these interventions is access to a socially competent group.

Children from low socioeconomic backgrounds or ethnic minorities also represent at-risk populations for peer difficulties. In the preschool years, peer play is a natural and dynamic context for bolstering the acquisition of important social competencies in these children, and interventions that are interwoven within this context have emerged as the most effective means for improving the peer interactions of these children. Developing and implementing interventions in partnership with early childhood educators and children’s families enhances their relevance for children from diverse cultures and socioeconomic backgrounds.

Intervention programs addressing problematic sibling relationships are in their infancy, but recent evidence suggests that social skills training can help reduce conflict between young siblings and increase their prosocial interactions. Interventions for parents focus on training them to mediate conflicts between their children rather than adjudicate for them. By structuring the negotiation process and yet leaving the final resolution in the hands of the children themselves, this kind of intervention aims not only to improve conflict outcomes but also to help children understand each other and develop constructive ways to resolve conflicts.

In both the United States and Canada, preschool education consists of a fragmented patchwork of programs with no national regulatory agency, organizational framework or support system. Thus, an important challenge for policy-makers is to find a way to disseminate information, provide adequate training to parents, child-care workers and teachers, make social skills curricula available to the large number of loosely connected programs serving preschool-aged children, and monitor the quality of such programs. 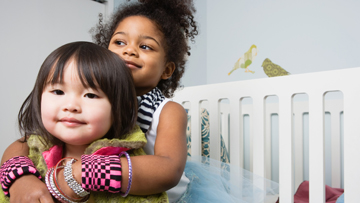 How can we help preschool children get along with their peers?

Preschool programs can teach children valuable skills to help them get along with their peers. For example, they can show them how to play and communicate well with others, control feelings of aggression and solve problems that may arise in social situations. Specifically they can…

Learning these skills will help children to make friends and be accepted by their peers throughout their school years – and can make a big difference in their success in school.

Social Skills Intervention and Peer Relationship Difficulties in Early Childhood: Comments on Bierman and Erath, Manz and McWayne, and Odom 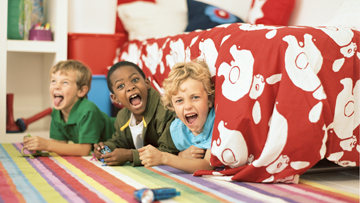 Regrouping or isolating children with behaviour problems in childcare setting is NOT a good idea.

This practice can amplify the problem and lead to chronic and uncontrollable behaviour problems.

Integrating troubled children with socially competent peers will help them to learn the behaviour that they lack.

As well, support from adults to stimulate language development and social skills, as well as problem solving, negotiation and anger-management skills will help the child to adapt and properly interact with others. 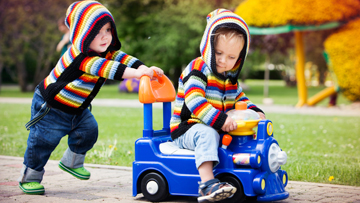 Playing with others is important

Very early on, babies start communicating with others by smiling, touching or babbling.

This natural predisposition will help them to play with other children, which is essential for their development.

Playing with others is the beginning of early socialization. Children will:

Positive relationships will help children to deal with strong emotions and protect them against depression, loneliness or school dropout in the teen years.

Early Peer Relations and their Impact on Children’s Development 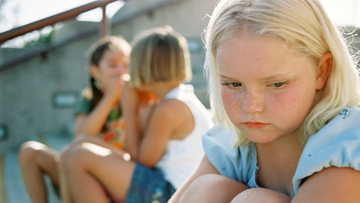 Abusive relationships, such as rejection and bullying, can have devastating effects on a child’s later social and emotional development and lead to chronic school adaptation issues.

With the support of caring adults, young children can acquire the main skills needed to avoid abusive relationships. They can learn to:

To promote this important learning, parents and educators should encourage activities, contacts and interactions between same age children at home or elsewhere.