Play is a legitimate right of childhood, representing a crucial aspect of children’s physical, intellectual and social development. This topic will help you understand the benefits of play and why it should be an integral part of young children’s education.

Play is a spontaneous, voluntary, pleasurable and flexible activity involving a combination of body, object, symbol use and relationships. In contrast to games, play behaviour is more disorganized, and is typically done for its own sake (i.e., the process is more important than any goals or end points). Recognized as a universal phenomenon, play is a legitimate right of childhood and should be part of all children’s life. Between 3% to 20% of young children’s time and energy is spent in play, and more so in non-impoverished environment. Although play is an important arena in children’s life associated with immediate, short-term and long-term term benefits, cultural factors influence children’s opportunities for free play in different ways. Over the last decade, there has been on-going reduction of playtime in favour of educational instructions, especially in modern and urban societies. Furthermore, parental concerns about safety sometimes limit children’s opportunities to engage in playful and creative activities. Along the same lines, the increase of commercial toys and technological developments by the toy industry has fostered more sedentary and less healthy play behaviours in children. Yet, play is essential to young children’s education and should not be abruptly minimized and segregated from learning. Not only play helps children develop pre-literacy skills, problem solving skills and concentration, but it also generates social learning experiences, and helps children to express possible stresses and problems.

Throughout the preschool years, young children engage in different forms of play, including social, parallel, object, sociodramatic and locomotor play. The frequency and type of play vary according to children’s age, cognitive maturity, physical development, as well as the cultural context. For example, children with physical, intellectual, and/or language disabilities engage in play behaviours, yet they may experience delays in some forms of play and require more parental supervision than typically developing children.

Social play is usually the first form of play observed in young children. Social play is characterized by playful interactions with parents (up to age 2) and/or other children (from two years onwards). In spite of being around other children of their age, children between 2 to 3 years old commonly play next to each other without much interaction (i.e., parallel play). As their cognitive skills develop, including their ability to imagine, imitate and understand other’s beliefs and intents, children start to engage in sociodramatic play. While interacting with with same-age peers, children develops narrative thinking, problem-solving skills (e.g., when negotiating roles), and a general understanding of the building blocks of story. Around the same time, physical/locomotor play also increases in frequency. Although locomotor play typically includes running and climbing, play fighting is common, especially amongst boys age three to six. In contrast to the popular belief, play fighting lacks intent to harm either emotionally or physically even though it can look like real fighting. In fact, during the primary school years, only about 1% of play-fighting turn into serious physical aggressions. Nevertheless, the effects of such play are of special concern among children who display antisocial behaviour and less empathic understanding, and therefore supervision is warranted.

In addition, to vary according to child’s factors, the frequency, type and play area are influenced by the cultural context. While there are universal features of play across cultures (e.g., traditional games and activities and gender-based play preferences), differences also exist. For instance, children who live in rural areas typically engage in more free play and have access to larger spaces for playing. In contrast, adult supervision in children’s play is more frequent in urban areas due to safety concerns. Along the same lines, cultures value and react differently to play. Some adults refrain from engaging in play as it represents a spontaneous activity for children while others promote the importance of structuring play to foster children’s cognitive, social and emotional development.

According to proponents of play pedagogy, there are specific skills and knowledge children should be supported in developing, and therefore play needs to be goal directed to some extent. Playworlds is an example of educational practice in which children and adults interpret a text from children’s literature through visual and plastic arts, pretend play, and oral narration. These highly engaging activities foster children’s literacy skills and interests in books and reading without imposing adult authority and hierarchy.

If play is associated with children’s academic and social development, teachers, parents and therapists are encouraged to develop knowledge about the different techniques to help children develop their play-related skills. However, in order to come up with best practices, further research on the examination of high-quality play is warranted.

From the available literature on play, it is recommended to create play environments to stimulate and foster children’s learning. Depending on the type of play, researchers suggest providing toys that enhance children’s:

Other recommendations have been suggested in order to enhance literacy skills in children. Researchers suggest that setting up literacy-rich environments, such as a “real restaurant” with tables, menus, name-tags, pencils and notepads, are effective to increase children’s potential in early literacy development. Educators are also encouraged to adopt a whole child approach that targets not only literacy learning but also the child’s creativity, imagination, persistence and positive attitudes in reading. Teachers and educators should also make a parallel between what can be learned from playful activities and academic curriculum  in order for children to understand that play allows them to practice and reinforce what is learned in class. However, educators should ensure that a curriculum based on playful learning includes activities that are perceived as playful by children themselves rather than only by the teachers. Most experts agree that a balanced approach consisting of periods of free play and structured/guided play should be favoured. Indeed, adults are encouraged to give children space during playtime to enable the development of self-expression and independence in children with and without disabilities. Lastly, parents of children with socio-emotional difficulties are encouraged to receive play therapy training (filial play therapy) to develop empathic understanding and responsive involvement during playtime. 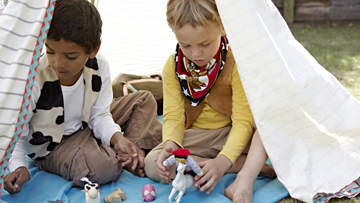 Why should play be part of all children’s life?

Play is a universal phenomenon and a right of childhood. It is a spontaneous, rewarding and fun with several benefits:

Our children live in a time of busy schedules and high expectations for achievement; we should take care to give them the time and space to discover the joy and benefits of free play.