Child maltreatment, or violence in any form, can cause serious harm to a child’s development, with long-term repercussions. It is imperative to understand the ramifications, both as parents and as a society, in order to prevent, detect, and ultimately, eradicate child maltreatment in all its forms.

Child Maltreatment and its Impact on Psychosocial Child Development: Epidemiology

McGill Centre for Research on Children and Families, Canada

Child maltreatment is the broad term used to describe abusive and neglectful acts perpetrated by adults or older youth against children. These fall into four broad categories: physical abuse, sexual abuse, neglect and emotional maltreatment. Physical abuse ranges from severe assaults against children that can permanently injure or kill children to abusive physical punishment to shaking infants. Sexual abuse includes intercourse, fondling, acts of exposure, sexual soliciting and sexual harassment. Neglect refers to a failure to supervise or protect a child or to meet a child’s physical needs. Neglect often occurs in a context of extreme poverty where parents may not have the resources or supports needed to meet a child’s needs. Emotional maltreatment includes extreme or habitual verbal abuse (threatening, belittling, etc.), and systematic lack of nurturance or attention required for a child’s healthy development. Children’s exposure to intimate partner violence (IPV) is increasingly being recognized as either a form of emotional maltreatment or a separate category of exposure.

Child maltreatment incidence statistics are tracked in Canada through the Canadian Incidence Study of Reported Child Abuse and Neglect (CIS), a periodical survey of cases investigated by provincial and territorial child-protection authorities.1 The 2008 cycle of the study found that an estimated 235,497 maltreatment related investigations involving children under 16 years of age were conducted in Canada in 2008, and that child maltreatment had been substantiated for 85,440 of these children, a rate of 14.19 victims per 1,000 children.a

Over a third of these children(31,506), were under six years of age.1 Rates of victimization were highest for younger children (17.10 per 1,000 children under one year of age compared to 14.57 for those under five), but there was no clear pattern by sex (see bar charts). 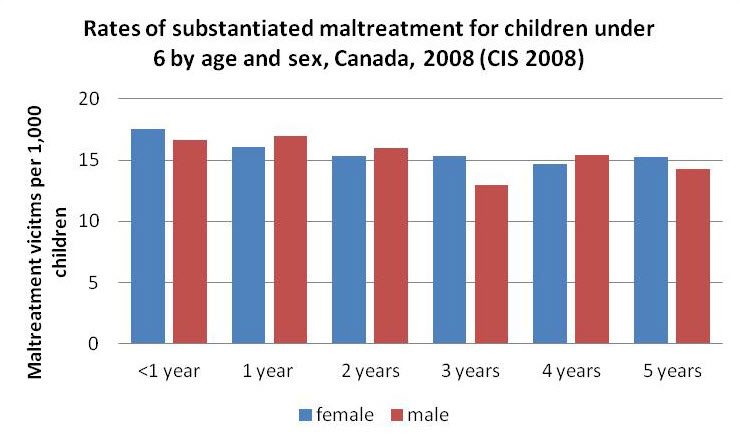 Prevalence studies measure rates of victimization during childhood, as opposed to incidence statistics that measure rates of victimization during a specific year. Results from a Canada-wide health survey show that 32% of respondents aged 18 years and older reported some type of child abuse, including physical abuse (26.1%), sexual abuse (10.1%) and exposure to intimate partner violence (7.9%). Women were more likely than men to report sexual victimization (14.4% v. 5.8%).  These findings are consistent with results from surveys conducted in Ontario4 and Quebec.5  Notably, the Quebec survey found that only 21.2% of adults reported disclosing their victimization within a month of the first abusive event.

Severe abuse leading to injuries is of particular concern in situations involving young children because of the elevated risk of permanent harm or death during the first four years of life. Children under five are at highest risk of being killed by a parent: 50% of children from birth to 17 who are killed by a family member are under four years old.6 Rates of child and youth homicides perpetrated by family members have been declining: the rate of family-related homicide against children and youth decreased by 18%, from 3.4 in 2007 to 2.8 per 1 million population in 2017.7

Most cases of maltreatment reported to child welfare services involve situations where children have already suffered some sort of emotional harm or are at significant risk of experiencing emotional harm. Young children are particularly vulnerable to a range of long-lasting negative cognitive, psychosocial, and behavioural outcomes, including learning problems, problems relating to peers, depression, anxiety or aggression.8 Maltreatment of young children changes the way they interpret interpersonal interactions, which in turn affects the nature of relationships with family and peers.9 Of particular concern is the growing evidence of neurobiological effects of maltreatment, especially emotional maltreatment and neglect, during early childhood.10

Child maltreatment is  increasingly recognized as a public health problem of growing concern. The rate of maltreatment has increased by over 50% from 9.21 substantiated investigations per 1,000 documented in 1998, to 14.19 in 2008.1 This increase appears to be primarily driven by broadening mandates and greater recognition of child maltreatment amongst professionals working with children, in particular with respect to the rate of neglect which has almost doubled, and the rate of exposure to IPV which has more than tripled.7,11 In contrast, the rate of substantiated sexual abuse has decreased by over 50% between 1998 and 2008. The increase in cases of exposure to IPV has primarily been driven by a dramatic shift in the response of the police, health professionals and school personnel, who account for nearly 90% of all domestic violence reports. The decrease in reports of child sexual abuse is more difficult to interpret. While the decrease in reports could be attributed to a decrease in rates of victimization in the population, there also is evidence that the decline reflects changes in reporting patterns and investigation procedures.12

Child maltreatment is a major health problem, affecting over 85,000 children a year across Canada. Abused and neglected children are at very high risk of developing long-term social, emotional and cognitive problems. The response to these children has, however, been fragmented. Beyond the universal introduction of mandatory reporting laws across Canada, few treatment and prevention programs have been systematically developed to meet the needs of these children. An examination of rates of victimization reveals a diverse population, ranging from cases of severe physical abuse requiring urgent response to complex cases of neglect and exposure to domestic violence, where the role of child protection authorities may need to be reconceptualized. Under the continued pressure of increasing caseloads, child welfare service-providers are seeking more effective models for collaborating with other service-providers.12,13