Basic number concepts and skills (numeracy) generally emerge before school entry. It is important to promote the development of these competencies in young children and to know the best learning methods, as these skills are often predictive of children’s future school achievement.

College of Education, University of Illinois at Urbana-Champaign, USA

How to best help students learn the single-digit (basic) addition facts, such as 3+4=7 and 9+5=14, and related subtraction facts, such as 7–3=4 and 14–9=5, has long been debated (see, e.g., Baroody & Dowker,1 particularly chapters 2, 3, 6, and 7). Nevertheless, there is general agreement that children need to achieve fact fluency.2 Fact fluency entails generating sums and differences efficiently (quickly and accurately) and applying this knowledge appropriately and flexibly. Over the last four decades, it has become increasingly clear that children’s everyday (informal) mathematical knowledge is an important basis for learning school (formal) mathematics.3,4,5 For example, research indicates that helping children build number sense can promote fact fluency.6,7,8,9 The aim of this entry is to summarize how the development of informal number sense before grade 1 provides a foundation for the key formal skill of fact fluency in the primary grades.

Question 1. The process of helping children build number sense—the foundation of fact fluency—can and should begin in the preschool years. Recent research indicates that children begin to construct number sense very early. Indeed, some toddlers as young as 18 months and nearly all 2-year-olds have begun learning the developmental prerequisites for fact fluency (e.g., see Baroody, Lai, & Mix,3 for a review).

Successful efforts to promote fact fluency depend on ensuring a child is developmentally ready and on not rushing the child. As research indicates significant individual differences in number sense appear as early as two or three years of age and often increase with age,3,10 there are no hard and fast rules about when formal training on fact fluency should begin. For many children though, this training, even with the easiest (n+0 and n+1) sums, may not be developmentally appropriate until late kindergarten or early first grade.11 For children at risk for academic failure, work with even the easiest sums often does not make sense until first or second grade.12

Questions 2 and 3. Some research indicates that language, in the form of the first few number words, plays a key role in the construction of number sense (for a detailed discussion, see Baroody;3 Mix, Sandhofer, & Baroody13). More specifically, it can provide a basis for two foundations of early number sense—namely a concept of cardinal number (the total number of items in a collection) and the skill of verbal number recognition (VNR), sometimes called “(verbal) subitizing,” shown at the apex of Figure 1. VNR entails reliably and efficiently recognizing the number of items in small collections and labeling them with the appropriate number word. The use of “one,” “two,” “three” in conjunction with seeing examples and non-examples of each can help 2- and 3-year-olds construct an increasingly reliable and accurate concept of the “intuitive numbers” one, two, and three—an understanding of oneness, twoness, and threeness.

The key instructional implications are that a basic understanding of cardinal number is not innate nor does it unfold automatically (cf. Dehaene15).14,16 Parents and preschool teachers are important in providing the experiences and feedback needed to construct number concepts. They should take advantage of meaningful everyday situations to label (and encourage children) to label small collections (e.g., “How many feet do you have?” “So you need two shoes, not one.” “You may take one cookie, not two cookies.”).  Some children enter kindergarten without being able to recognize all the intuitive numbers. Such children are seriously at risk for school failure and need intensive remedial work. Kindergarten screening should check for whether children can immediately recognize collections of one to three items and be able to distinguish them from somewhat larger collections of four or five.

As Figure 1 illustrates, the co-evolution of cardinal concepts of the intuitive numbers and the skill of VNR can provide a basis for a wide variety of number, counting, and arithmetic concepts and skills. These skills can provide a basis for meaningful verbal counting.  Recognition of the intuitive numbers can help children literally see that a collection labeled “two” has more items than a collection labeled “one” and that a collection labeled “three” has more items than a collection labeled “two.” This basic ordinal understanding of number, in turn, can help children recognize that the order of number words matters when we count (the stable order principle) and that the number word sequence (“one, two, three…”) represents increasingly larger collections. As a child becomes familiar with the counting sequence, they develop the ability to start at any point in the counting sequence and (efficiently) state the next number word in the sequence (number-after skill) instead of counting from “one.”

The ability to automatically cite the number after another number in counting sequence, can be the basis for the insight that adding “one” to a number results in a larger number and, more specifically, the number-after rule for n+1/1+n facts. When adding “one”, the sum is the number after the other number in the counting sequence (e.g., the sum of 7+1 is the number after “seven” when we count or “eight”). This reasoning strategy can enable children to efficiently deduce the sum of any such combination for which they know the counting sequence, even those not previously practiced including large multi-digit facts such as 28+1, 128+1, or 1,000,128+1. In time, this reasoning strategy becomes automatic—can be applied efficiently, without deliberation (i.e., becomes a component in the retrieval network). In other words, it becomes the basis for fact fluency with the n+1/1+n combinations.

VNR, and the cardinal concept of number it embodies, can be a basis for meaningful object counting.17 Children who can recognize “one,” “two,” and “three” are more likely to benefit from adult efforts to model and teach object counting than those who cannot. They are also more likely to recognize the purpose of object counting (as another way of determining a collection’s total) and the rationale for object-counting procedures (e.g., the reason why others emphasize or repeat the last number word used in the counting process is because it represents the collection’s total). Meaningful object counting is necessary for the invention of counting strategies (with objects or number words) to determine sums and differences. As these strategies become efficient, attention is freed to discover patterns and relations; these mathematical regularities, in turn, can serve as the basis for reasoning strategies(i.e., using known facts and relations to deduce the answer of an unknown combination). As these reasoning strategies become automatic, they can serve as one of the retrieval strategies for efficiently producing answers from a memory or retrieval network.

VNR can enable a child to see one & one as two, one & one & one as three, or two & one as three and the reverse (e.g., three as one & one & one or as two & one).  The child thus constructs an understanding of composition and decomposition (a whole can be built up from, or broken down into, individual parts, often in different ways). Repeatedly seeing the composition and decomposition of two and three can lead to fact fluency with the simplest addition and subtraction facts (e.g., “one and one is two,” “two and one is three,” and “two take away one is one”). Repeatedly decomposing four and five with feedback (e.g., labeling a collection of four as “two and two”, and hearing another person confirm, “Yes, two and two makes four”) can lead to fact fluency with the simplest sums to fiveand is one way of discovering the number-after rule for n+1/1+n combinations (discussed earlier).

The concept of cardinality, VNR, and the concepts of composition and decomposition can together provide the basis for constructing a basic concept of addition and subtraction. For example, by adding an item to a collection of two items, a child can literally see that the original collection has been transformed into a larger collection of three. These competencies can also provide a basis for constructing a relatively concrete, and even a relatively abstract, understanding of the following arithmetic concepts18:

A weak number sense, then, can interfere with achieving fact fluency and other aspects of mathematical achievement. For example, Mazzocco and Thompson19 found that preschoolers’ performance on the following four items of the Test of Early Mathematics Ability—Second Edition (TEMA-2) was predictive of which children would have mathematical difficulties in second and third grade: meaningful object counting (recognizing that the last number word used in the counting process indicates the total), cardinality, comparing of one-digit numbers (e.g., Which is more five or four?), mentally adding one-digit numbers, and reading one-digit one numerals. Note that verbal number recognition of the intuitive numbers is a foundation for the first three skills and meaningful learning of the fourth.

Question 4. The basis for helping students build both number sense in general and fact fluency in particular is creating opportunities for them to discover patterns and relations. For example, a child who has learned the “doubles,” such as 5+5=10 and 6+6=12, in a meaningful manner (e.g., the child recognizes that the sums of this family are all even or count-by-two numbers) can use this knowledge to reason out the sums of unknown doubles-plus-one facts, such as 5+6 or 7+6.

In order to be developmentally appropriate, such learning opportunities should be purposeful, meaningful, and inquiry-based.20

The various points above are illustrated by the case of Alice21 and Lukas.22

Much still needs to be learned about preschoolers’ mathematical development. Does VNR ability at two years of age predict readiness for kindergarten or mathematical achievement in school? If so, can intervention that focuses on examples and non-examples enable children at risk for academic failure to catch up with their peers? What other concepts or skills at two or three years of age might be predictive of readiness for kindergarten or mathematical achievement in school? How effective are the early childhood mathematics programs currently being developed?

Contrary to the beliefs of many early childhood educators, mathematics instruction for children as young as two years of age does make sense.23,24,25,26 As Figure 1 makes clear, this instruction should start with helping children construct a cardinal concept of the intuitive numbers and the skill of recognizing and labeling sets of one to three items with an appropriate number word. As Figure 1 further illustrates, these aspects of number knowledge are key to later numeracy and often lacking among children with mathematical disabilities.27 Early instruction does not mean imposing knowledge on preschoolers, drilling them with flashcards, or otherwise having them memorize by rote arithmetic facts. Fostering number sense and fact fluency both should focus on helping children discover patterns and relations and encouraging their invention of reasoning strategies. 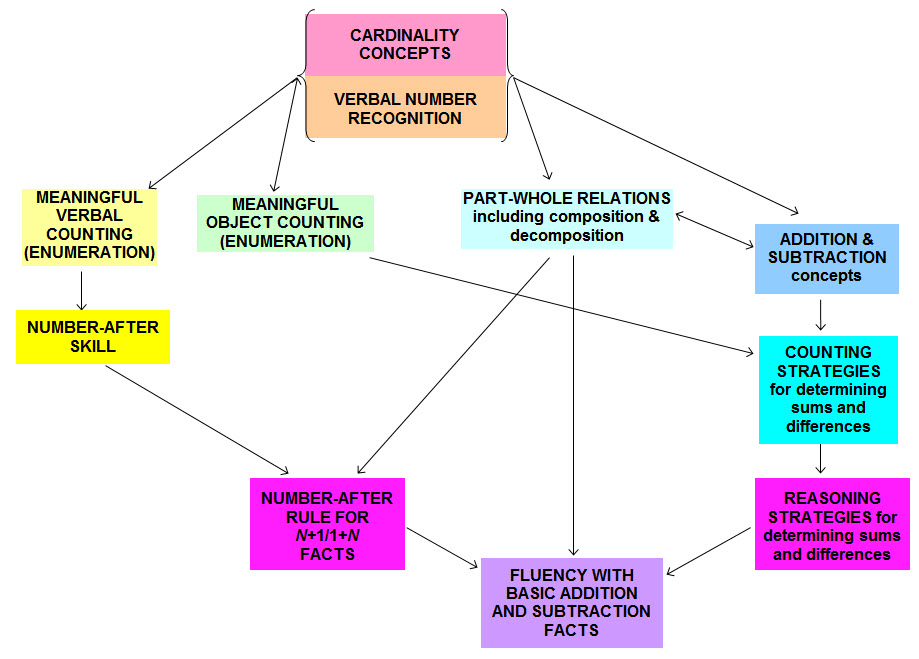 The research described was supported, in part, by a grant from the National Science Foundation (BCS-0111829), the Spencer Foundation (Major Grant 200400033), the National Institutes of Health (1 R01 HD051538-01), and the Institute of Education Science (R305K050082). The opinions expressed in the present manuscript are solely those of the author and do not necessarily reflect the position, policy, or endorsement of the aforementioned institutions.